By admin Last updated Sep 6, 2018
131
Share
By: Rolla
Bahsous
Syrian artist
Faia Younan charmed the Toronto audience on the night of November 10, 2017 at her
sold out show in the Isabel Bader Theatre during the eight evening of the
Festival of Arabic Music & Arts. 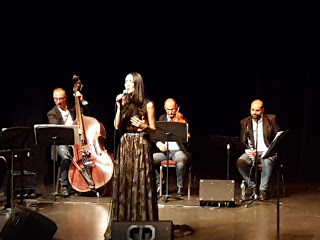 Younan, known as
the first Middle Eastern artist to crowdfund her debut, dedicated many of her
songs to her homeland, with special tribute to the children of Syria.
Fans enjoyed
favourites like “Baynatna Fi Bahr,” (A Sea Between Us), “Li Fi Halab” (For Me,
in Aleppo), “Nam Ya Habibi” (Sleep, My Darling), “Zanoubia,” and “Mawtini” (My
Homeland).
Younan, who is
of Syriac origin, also pleased the crowd by singing one song in the Syriac
language. Her charming personality brought elegance to the stage, as she took
her audience on a celebration of Syria and the rest of the Middle East.
Before singing,
“Li Fi Halab,” (For me, in Aleppo) Younan notes that “even with all the war and
destruction that Aleppo faced, I choose to sing this song and still see Aleppo as
the beautiful place I knew.”
Younan, who
dedicates her art to humanitarian causes, mentioned that she hopes her music,
like the song, “Nam Ya Habibi” (Sleep, My Darling), would help ease the anxiety
of children facing war.
During her
performance of “Nam Ya Habibi,” Younan asked the audience to turn their phone
flashlights on to light up the theatre in remembrance of the children who were
killed during the civil war, and in tribute to the surviving children that
continue to face hardship.
Between songs,
Younan spoke about her belief that art and music unites people, and about her hope
for peace in the Middle East and around the world.

Outside of the
auditorium, Syrian artist, Rana Hatmal, displayed her art pieces in an
exhibition she dedicated to the people of Damascus. Like many of the musicians,
Hatmal also believes that “art should join people.” 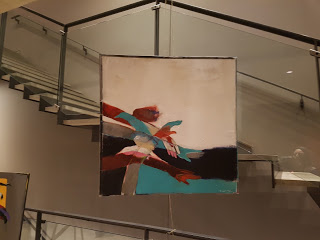