By admin Last updated Sep 6, 2018
97
Share
The Canadian Arabic Orchestra is proud to announce programming for the inaugural
FESTIVAL OF ARABIC MUSIC & ARTS 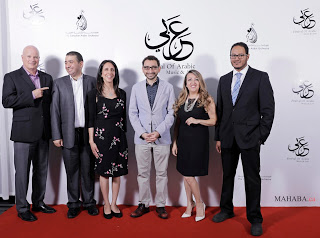 At a joyful gathering at Mississauga City Hall on Wednesday, July 19, The Canadian Arabic Orchestra (CAO) celebrated the conclusion of their successful 2016/2017 performance season and announced a new venture, the first annual Festival of Arabic Music & Arts (FAMA).
Running from October 28 to November 12, the Festival will present a series of concerts and other live performances across the GTA including Toronto, Mississauga and Brampton, both free and ticketed events with almost 100 artists, local and from around the world. The CAO and FAMA aim to promote intercultural dialogue among the tapestry of Canadian society through music and art, and seek to connect expatriate Arabs, and non-Arab communities, and to build bridges through the musical heritage of Arabic culture.

The Festival will open on Saturday, October 28 with a double bill at the esteemed Koerner Hall with
Toronto’s own three-time JUNO-nominated Sultans of String, an instrumental group that combines
elements of Spanish flamenco, Arabic folk, Cuban rhythms, and French Manouche Gypsy-jazz,
opening for special guest Iraqi guitarist, singer and composer Ilham Al Madfai. From picking up his
first guitar to forming The Twisters, the Middle East&#39;s first rock band in 1960s Baghdad, this maverick Arabic musician has traveled the world with his band bringing Arabic music to a whole new generation.
Closing night brings another Iraqi artist to the GTA, master oud player Naseer Shamma, who will
play with members of the Canadian Arabic Orchestra in the expansive Hammerson Hall in the
Mississauga Living Arts Centre. After receiving his diploma from the Baghdad Academy of Music,
Shamma began to teach oud while composing and performing music for theatre, film and television.
He created the Arabic Oud House in Cairo, the first school completely dedicated to teaching oud
where scholars of all ages come to study. For his appearance in the Festival, Shamma will perform a
traditional classical Arabic repertoire.
On November 9, The Aga Khan Museum will host the world premiere of Origins, an Indigenous and
Arabic presentation that includes classical, folk and contemporary music, throat singing, and
ceremonial performances, and a joint performance of traditional Native songs accompanied by
classical Arabic instruments. In the spirit of truth and reconciliation, in the interest of embracing the
rich diverse heritage of Canada, and in an effort to deepen the sense of belonging among Canadians
of Arab heritage, Origins is produced and presented in association with the Native Canadian Centre
of Toronto, the Arab Community Centre of Toronto, the Aga Khan Museum, the artist Laura
Grizzlypaws, and Rumi Canada.
“We are building on two successful seasons to realize a dream to establish a successful annual
festival of Arabic music, song, culture and arts. Our team is very excited at the prospect of bringing a
myriad of artists, local and international, to Arabic music lovers, both Arab and non-Arab in audiences
across Ontario.” Wafa Zaghal, Founder &amp; CEO, Canadian Arabic Orchestra &amp; FAMA
Other Festival highlights include Egyptian comedian writer, producer and cardiothoracic surgeon,
Bassem Youssef (Nov 11 @ Bluma Appel Theatre, Toronto) host of the satirical television news
program Al-Bernameg (The Show) from 2011-2014. Often compared to Jon Stewart, who is a fan
himself, a documentary film, Tickling Giants, about Youssef’s rise and fall in Egypt was released in
2016.

A young Syrian singer, Faia Younan (Nov 10 @ Isabel Bader Theatre, Toronto) was the first Middle
Eastern artist to crowdfund her debut single. Born in Aleppo, Younan spent her youth in Sweden and
went to university in Scotland before moving to Beirut to pursue her dream to become a professional
singer. A YouTube star today, Younan is committed to art with a purpose and sharing the beautiful
side of her country.
Multi award-winning Lebanese composer, singer and musician, Charbel Rouhana, who established
a new method for playing oud which is taught at the National Conservatory of Music in Lebanon and
the Holy Spirit University of Kaslik, will perform with the Canadian Arabic Orchestra (Nov 3 @ Jane
Mallett Theatre, Toronto). This concert will also be performed as part of the Festival du Monde Arabe
de Montreal (Nov 5 @ Monument National).
In association with Théâtre Français de Toronto, FAMA presents Djihad, a French-language play
from Belgian playwright Ismael Saidi about disillusioned youth becoming foreign fighters in Syria (Nov 5 @ Berkeley Street Theatre, Toronto). A dark comic play which mixes serious messages with
mockery, it confronts head-on the misinterpretations of Islam and Muslim society. Djihad, which has
toured across Belgium and was presented at last year’s Festival du Monde Arabe de Montreal,
fosters citizenship and a sense of belonging among the Arabic community and encourages
understanding and acceptance by Canadians at large.
Other FAMA presentations include Jazzy Arabia (Oct 29) at Maja Prentice Theatre in Mississauga;
Badi Etzawaj (Oct 29) and Golan (Nov 4) at Lester B. Pearson Memorial Theatre in Brampton;
French-Syrian musician Waed Bouhassoun (Nov 1) at the Revue Cinema in Toronto; and
Reminiscing Damascus, a Syrian art exhibition curated by Rana Hatmal at the Isabel Bader
Theatre in Toronto.
Dedicated to connecting audiences with classical Arabic music while celebrating the freedom and
diversity of Canada’s cultural landscape, the Festival of Arabic Music &amp; Arts hopes to deliver world
harmony one note at a time!

All-Access Festival Passes for $350 are on sale now! (Value $430)
For a full Festival schedule and to purchase Passes
please visit: canadianarabicorchestra.ca/fama/
Get Social: facebook.com/CanadianArabicOrchestra/

About the Canadian Arabic Orchestra: The CAO is a not-for- profit organization registered in Mississauga with the prime objective of promoting multi-cultural dialogue and understanding through the universal language of music. The mission of the Canadian Arabic Orchestra is &quot;To Connect, Enrich, and Inspire Through Music to connect people from diverse cultures, and reconnect people from Arab origins with their roots. The organization also aims to enrich by educating people about the vast Arabic cultural and musical heritage, and to inspire more musical creativity resulting from exposure to this type of music by both Arab and non-Arab musicians who wish to contribute to the music scene in Canada by composing and writing new music. Over the past two seasons, from September to May, the Orchestra has held more than 30 concerts in Ottawa, Montreal, Kitchener, London, Mississauga, Toronto, and Oakville performing to an audience of 12,000. We have
performed at the Mississauga Living Arts Centre, Aga Khan Museum, the Maureen Forrester Recital Hall in Waterloo, the Algonquin Commons Theatre in Ottawa, and most recently at the Stratford Summer Music Festival (2016,) and Luminato Festival (2017).
FAMA acknowledges the generous support of the City of Mississauga, Ontario Cultural Attraction Fund and Ontario Arts Council.