Meet Sethi, During SIAL Canada talking about the Ethnic foods 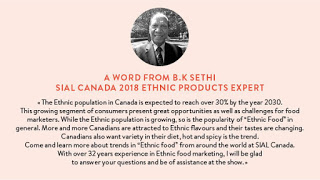 B.K. Sethi, president of B.K. Sethi Marketing Ltd., started importing, distributing and marketing « authentic ethnic » food products in 1982. B.K. realized the tremendous opportunities within the growing, new segment of consumers arriving from “non-traditional” parts of the world, including East and South Asia, the Caribbean, and the Middle East. He concentrated on providing these consumers with the types of food products to which they were accustomed. Within 10 years, B.K.’s « ethnic » products were available in Canada from coast to coast, inside of most major mainstream and ethnic retailers. 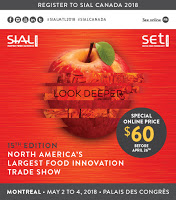 Through his knowledge, expertise and dedication, B.K. Sethi became the leader when it came to  marketing to ethnic consumers. He conducted seminars and had his articles published in most grocery and marketing magazines.

He has appeared in a variety of media outlets, including the CBC, CFMT, ATN and was featured in The Globe and Mail, Toronto Star, Canadian Grocer, Western Grocer, Marketing, and strategy. B.K. has consulted for many multinationals, providing support regarding strategy, planning and execution. He has worked with companies that include Unilever, Robin Hood Multifoods, Kraft, H.J. Heinz, Lee Kum Kee, Herdez, GraceKennedy, and the Dairy Farmers of Canada.

In 2012, B.K. Sethi sold the distribution component of his business to concentrate all his efforts on consulting with progressive businesses to provide them with business strategies, plans, execution support, and communication strategies. He has travelled extensively within North America (including Mexico), as well as in Europe and Asia.

B.K. Sethi has an MBA in Marketing from Michigan University and a diploma in Business Administration from the Delhi School of Economics. He lives in Toronto.

Looking for creative solutions to promote your business and reach faster to your target market?

Unveiling of the 2018 SIAL FOOD HUB