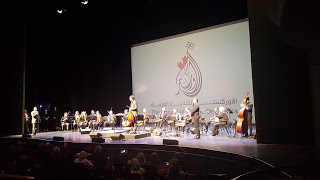 Known as the master of Oud, Dr. Naseer Shamma ended the first annual
Festival of Arabic Music and Arts (FAMA) on a high note with his performance,
“On the way to Baghdad,” at the Living Arts Centre in Mississauga.
Shamma, who
received his PhD in music, shared the stage with the Canadian Arabic Orchestra,
but also delighted the audience on Sunday night with several solos. Audience
members watched in awe as Shamma even played the oud with just one hand at
times.

Shamma is known
for his compositions for films, plays, and television, but is also known for
creating the Arabic Oud house in Cairo, Tunis, and Dubai. He is also world
renown for having constructed the Farabi Oud from the 9th Century
AD.
While this isn’t
Shamma’s first time performing in Canada, it was an extra special performance
for him as he received his PhD degree on stage, between songs. What made it
more special for Shamma was the opportunity to play alongside the Canadian
Arabic Orchestra. 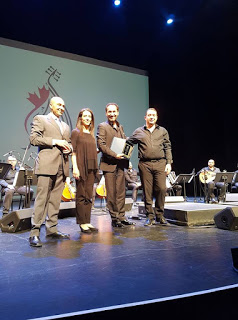 “Sharing the
stage with Canadian musicians is meaningful for me. It’s not easy to do
something this important in just a few days, but as professional musicians we did
it. I am so happy because this is the first year for the festival, and we had a
strong start with a good program, with artists from everywhere. I am so glad
that there are a lot of people participating, especially in Canada,” Shamma
explained.
“We have very
good emotions about Canada. We’ve had a lot of bad situations happening in the
past few years, with Iraq and with Syria, but Canada has been supportive and always
on the side of humanity, so it’s very important to be here, to play here, and
to enjoy with the Canadian people.”
Shamma’s
appreciation for the audience was evident as he graciously took the time to
greet and take photos with fans following the show.
While the
performance was titled “On the way to Baghdad,” Shamma explained that his
compositions are influenced by music from all over the Middle East.
“I always feel
that there are a lot of secret stories presented to the people when I’m on
stage. When I perform solo, I feel like there are a lot of details from
Baghdad, Syria, Tunis, Egypt, everywhere. This is not because I want to touch
people from each country, but this is my feeling, I like all music. I like playing
traditional music from all over. It brings me joy.”
When asked what
message he hopes his music brings, Shamma echoed the sentiments of previous
FAMA artists.
“I hope my music
brings beauty and peace. Music has both, beauty and peace. I hope my music
carries that message. And I hope my music raises people’s spirits.”
For
more information about the Canadian Arabic Orchestra, visit www.canadianarabicorchestra.ca/
122
Share FacebookTwitterGoogle+ReddItWhatsAppPinterestEmailLinkedin

A PERSONAL MESSAGE FROM THE PREMIER