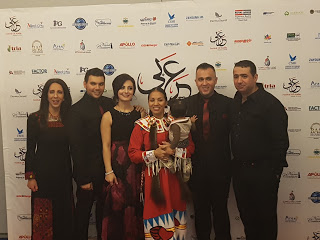 Toronto
audiences had the chance to witness one of the most unique musical
collaborations last night at the Aga Khan Museum on the seventh day of the
Festival of Arabic Music and Arts (FAMA).  Origins
was just that – the first of its kind.
Canadian Arabic
Orchestra poet/singer, Hassan Tamim, the mastermind behind this fusion of
cultures, worked with Indigenous artist, Laura Grizzlypaws, to combine the
sounds of Arabic music with that of the Indigenous nations of Canada.
Tamim explains
that the idea for Origins came from Wafa Al Zaghal co-founder, CEO & Qanun player of the Canadian Arabic Orchestra and .  Wafa suggested “that as the Orchestra vision is to find a way, a joint program to
bring together Arabic music with Indigenous music and music of the world, and to connect people from diverse cultures, and reconnect people from Arab origins with their roots.”
The music,
accompanied by twirling dervishes, took the audience on a mystical journey of
spirituality, fantasy, and showcased what happens when cultures collide in
perfect unity.
Grizzlypaws,
Tamim, and the rest of the vocalists took turns to sing traditional native and Arabic
folkloric songs, respectively. The music from both cultures highlighted the
parallel narratives: the struggles of the Indigenous nations of Canada, and
those of the Indigenous populations of the Levant (Iraq, Palestine, Lebanon,
Syria, and Jordan).
Tamim debuted
his original songs, “Li Annana Nughanni,” “Azkar Rabbanieh”, “Aradian,” and “Al
Rimal Al Khadra’a.”
Grizzlypaws’ powerful
voice captivated the audience as she performed some of her own compositions, “Hear
Me,” “Can You Use this Child,” and “I don’t want to sing, I have to sing!”
The common theme
of humanity was exemplified when Grizzlypaws sang in Arabic during some of the
Arabic songs, while the Arabic vocalists joined her during some of the
Indigenous numbers.
A discussion
panel followed the performance when Grizzlypaws proudly introduced herself in her
Indigenous language.
“It’s customary for
me to acknowledge my ancestry. I give many thanks for the opportunity to
celebrate the joys of culture through music, art and dance,” Grizzlypaws said,
while holding her baby daughter.
“This is what we
are all here for, to ensure that our cultures survive and are passed on from generation
to generation.”
“I firmly
believe that we are all people of the land, and we are all equal, regardless of
differences in religion or ethnic origin. We are all people, we are all the
same, and when we come together like this and celebrate in good harmony, that
itself is good medicine,” Grizzlypaws continued.
When asked how
they prepared for this performance, Tamim explained, “I started by working with
Laura in selecting what music she wanted to sing. And then I looked at the
music involved in Laura’s art, and tried to find the harmony between Indigenous
music and Arabic music, until I found a point where it clicked.”
“From there, we
worked to build a rhythm between the two different genres of music, and that’s
where Wafa Al Zaghal came in to play with trying to find the harmony that
involved not only the instruments, but also the choir to end up with something
that we were able to present to you tonight.”
Tamim’s final
score, “Al Rimal Al Khadra’a” (“Green Sands” in English), represents the
process in creating Origins.

“To find eternal
peace, I coined the term ‘Green sands.’ ‘Green’ comes from Canada and North
America, and the Indigenous people and their lands, coupled with what people
may associate Arabs with, ‘sands,’ to represent the desert. ‘Green sands’
signifies the unison between these two lands,” Tamim explained.
When asked what
message do they each hope this collaboration brings, Grizzlypaws eloquently
said “It goes back to the people of the land.”
“We have a
responsibility for the sustainability for our own unique culture, our own songs
and dances, but there’s also a time to educate, a time to share, a time to
celebrate, a time to come together, a time to sing and dance and honour each
other as people of the land. With that unity, we can have respect and a better
understanding of each other. This has to be shared throughout Canada. So many
cultures are clashing, but there is a time to share and honour one another.
This is something that should continue to happen.”
Tamim echoed her
response, “It also goes back to what I said about ‘Green Sands.’ We connect on
the same level. We are all people of the land, regardless of where we come
from.”
For
more information about FAMA, and to buy tickets to the rest of the amazing
performances until November 12th , visit www.canadianarabicorchestra.ca/FAMA
120
Share FacebookTwitterGoogle+ReddItWhatsAppPinterestEmailLinkedin

“Golan,” more than a mash up of jazz and Arab traditions