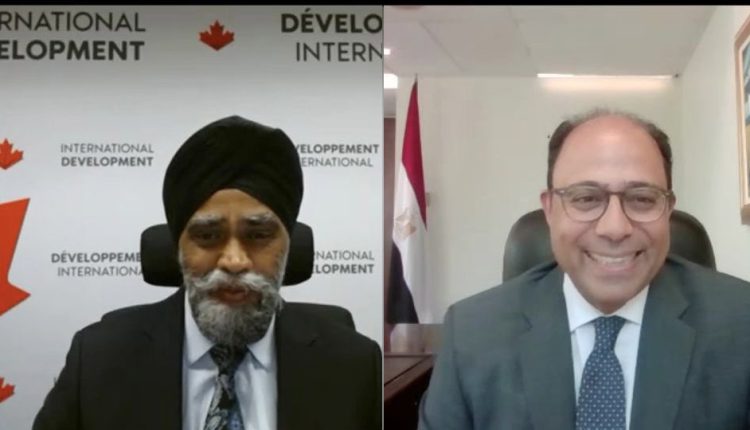 Egyptian Ambassador in Ottawa, Ahmed Abu Zeid,  has discussed with Minister of International Development, Harjit Sajjan, various areas of cooperation between Egypt and Canada during a Zoom meeting.

In a statement to Ambassador Abu Zeid, he indicated that the meeting came within the framework of preparing for the upcoming visit of the Canadian minister to Egypt, which will include meetings with a number of Egyptian ministers and field visits to a number of development projects funded by Canada in the various governorates, and in the context of consultations with the Egyptian presidency for the 27th session of the UN Conference on Climate Change.

The Conference of the Parties to the United Nations Framework Convention on Climate Change (COP27) is expected to be held in Sharm El-Sheikh next November.

For his part, the Canadian minister expressed during the meeting his aspiration to visit Egypt and consult with Egyptian officials in light of the great role it plays as the presidency of the COP27 conference, in addition to exploring ways to enhance the growing bilateral partnership between the two countries. He also stressed the special importance that Canada attaches to Egypt due to its regional and international weight, and his happiness to visit Egypt, which he visited more than once during his tenure as Minister of Defense in the previous government.