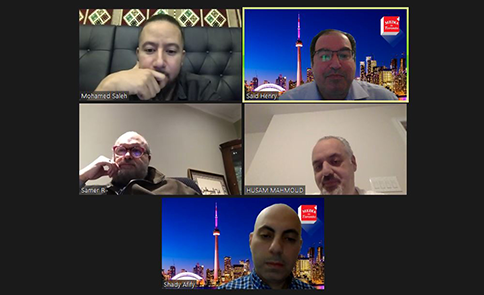 @RestaurantsCA  #RCshow MEDIAinTORONTO organized Last January a virtual meeting “ADAPTATION 2021” with some of the #ethnic #restaurants owners of small and medium businesses to talk about their experience during the pandemic last year and what did they do to float their businesses through the pandemic.
The meeting was attended by Dr. Hussam Mahmoud, Owner, Roman Zaman Restaurant, Samer Rahwanji Owner, Tria Cafe and Bakery and Mohamed Saleh Owner, Masrawy Kitchen.

Samer Rahwanji talked about his tough experience during 2020 and how his business “Tria” was badly affected as the landlord closed the business as he did not want to participate in the government’s rental support program and he did not reach an agreement with him.
He said he talked to everyone trying to solve the problem, but nothing happened.

For his part, Mohamed Saleh, Owner of Masrawy, said that the situation was so harsh. “We still were lucky that we had takeout on catering because we started off as caterers fixed cost and the variable costs never changed for we were doing, what was like 20% of what we were doing before. Maybe even less at some days I remember seeing and wondering like how we’re going to deal with this.”
“I’ll just tell you what worked for me and what didn’t work for me. I had a lot of people, I had the same scenario with my landlord. So, I literally just realised that I’m not going to get help from anybody and at that time the subsidies started so I quickly got the subs whatever I could get from the government including that 40,000 that would help. I stored it and then I basically just did my best to boost out marketing and promote the take home because I had, that’s basically what I was living off over. What people didn’t know is our margins were literally it was already too small, and then delivery apps are eating whatever was left of that margin,” he said.

For Dr. Hussam Mahmoud he came up with something different to try to help his business to survive, he made his own MobileAPP.
“It was hard. I believe it was extremely harsh on the restaurants, especially when I look at it as the numbers they were always announcing. And the reason for the lockdowns that all the restaurants got hit with. It has nothing to do with the restaurant and that where it was honestly frustrating because when they locked us down the numbers kept increasing. So it was so obvious has nothing to do with the restaurants, especially that we did the social distancing lots of restaurants put the Plexiglas in order to separate between booth and between tables,” he said.
“They locked all Ontario, mainly peel. And that’s the biggest area of the whole GTA I believe, and they kept the small areas and everyone was started floating into that area, still they kept it open, and the people who got hit, honestly, is the people on the peel which is us, mainly in Mississauga, and Brampton. I live in Oakville. It’s exactly like 10 minutes away from my restaurant, and it’s so funny that restaurants in Oakville are open and in peel are closed.”

“I built up an app for me. It was cut down of between me and Uber and skip the dishes, so I cut down a lot of the percent that they’re taking, which is around 30%. It ended up like around 8% that huge difference that I can save myself, to be honest, that what helped me to maintain my prices.”
“People do not look at us that if we raise the prices or whenever we raise 99 cents. Sometimes they think we’re doing this for the sake of us but it’s just trying to survive, because the overhead is extremely high.”
“I have the app, where people can order directly with me, has nothing to do with anyone else, they can come and pick up from us, they can choose the time they want their food to be ready specifically so when they step into the restaurant. They don’t have to wait, we bring the food outside to them. They take it and then they leave. That was the honestly one of the things that kept me maintaining my business and I was shocked how many people got into the app so quickly?”

“COVID-19 created a unique opportunity for accelerated executive buy-in on digital investments supporting e-commerce and online was a middle-of-the-list agenda item for most companies, but now, nearly every company has made online shopping a number one priority,” Said Henry, Owner and Founder of MEDIAinTORONTO and digital marketing expert, said.
“A successful plan requires proper prioritization of projects, pushes the boundaries while staying realistic, and, most importantly, is profitable.
My framework for successful digital transformation is supported by five essential pillars: partners, people, education, culture, and data/change management. If you get these five pillars correct, you’ll be in a solid position to scale,” he added.

“Influencer marketing became immensely popular, and I don’t see it going away. For brands, however, it’s important to be careful about which influencers you partner with: you need to examine their followers to ensure they align with your target audience, because follower numbers alone can be deceiving.”
In December, Restaurants Canada said 10,000 restaurants had closed across Canada since the pandemic began in March, and almost 50 percent expect to permanently close their establishment if conditions don’t improve.
“The vast majority of Canadian consumers are concerned that restaurants in their community may not survive and feel that restaurants are an important part of their community,” said Todd Barclay, President and CEO of Restaurants Canada.
The organization said no other industry has been hit as hard as the restaurant industry during this pandemic. At the height of the crisis, an estimated 800,000 jobs were lost or had hours reduced to zero. Since then the industry has struggled to recover due to revolving restrictions across Canada, with 21 percent of the restaurant workforce not yet recovered, it said.
Between March and April 2020, more than 800,000 workers in the Canadian foodservice sector lost their jobs or had their hours of work reduced to zero. According to the December Labour Force Survey from Statistics Canada, there are still more than 316,000 fewer jobs in the foodservice sector than there were in February 2020.

“ADAPTATION 2021” is a series of virtual meetings, targeting small and medium business owners to talk about their experience in floating through the pandemic and what did they do to keep their companies alive in this new changing world, organized by Media in Toronto.