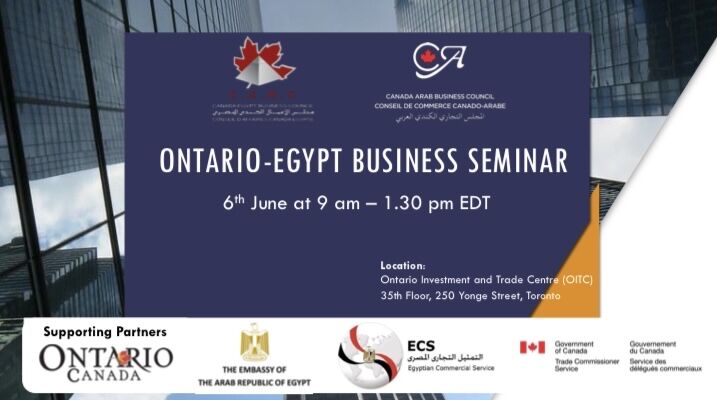 The Canada Arab Business Council (CABC) and the Canada Egypt Business Council (CEBC), in collaboration with the Ontario Government and the Republic of Egypt Embassy in Ottawa, on Monday, hosted their first in-person seminar promoting trade and investment between Ontario and Egypt on the 6th of June.
This event was attended by senior government and business representatives from Egypt in Agri-Food, ICT, Services, Healthcare, Resources, and Clean Energy, who are in Toronto on the 6th – 7th June.
The talks featured opportunities between Ontario Canada and Egypt. The seminar was attended by Toronto Mayor John Tory and Corie McDougall, Deputy Minister of Economic Development, Job Creation and Trade in the Government of Ontario, Rocco Rossi President of the Ontario Chamber of Commerce, MPP Sheref Sabawy, in addition to a group of Egyptian and Canadian company heads and businessmen, where prospects for cooperation were reviewed. The Egyptian ambassador, Ahmed Abu Zeid, delivered a speech during the seminar in which he praised the initiative of Egypt-Canada Business Council headed by Eng. Moataz Raslan to form a delegation of Egyptian businessmen to visit Canada and meet with representatives of the Canadian business sector interested in investing in Egypt and establishing commercial and economic partnerships with it.

Ambassador Abu Zeid indicated that the embassy in Ottawa organized an integrated program for the delegation, including meetings with the heads of a number of Canadian companies, business incubators and chambers of commerce, and field visits to some factories in Toronto, Ottawa, and Montreal, in addition to meetings with various governmental and parliamentary agencies concerned with relations with Egypt and In the areas of competence of the delegation in the capital, Ottawa, noting the great opportunities available for cooperation in various fields, including education, agriculture, fertilizers, transportation, and renewable energy. The Mayor of Toronto, John Tory, also delivered a speech during the event, in which he welcomed the delegation of businessmen and praised Egypt’s 2030 Agenda and the great growth rates that Egypt has succeeded in achieving during the last period, expressing his aspiration to organize a visit for a Canadian delegation of businessmen to Egypt in the near future to build on the momentum of that successful visit.