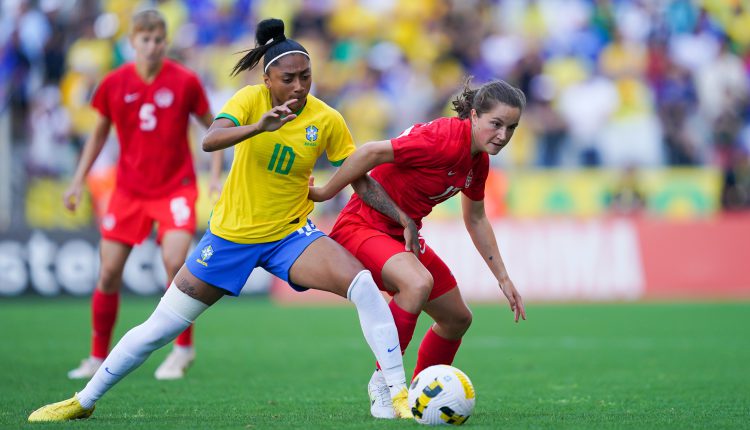 Canada’s national women’s soccer team lost to Brazil on Tuesday, but manager Bev Priestman saw a lot of positives in her team’s performance.

Team Canada split their two-match series against Brazil in the November international window following a 2:1 win on Friday 11 November and a 2:1 loss on Tuesday 15 November. After Shelina Zadorsky and Adriana Leon scored in the opening match, Ashley Lawrence was Canada’s goalscorer from the penalty spot in the Tuesday loss.
The Canada goal was Lawrence’s eighth career international goal, albeit her first from the penalty spot.
“These are the best things that can happen to us because we’ll grow”, said Canada Soccer’s Women’s National Team Head Coach Bev Priestman. “We have to challenge ourselves and in the nature in which we lost, we’ll never let that happen again. We’ve made huge gains in many areas. I’m excited to hopefully get the majority of what would be the FIFA World Cup squad together in the February window.”

After their Friday loss, Brazil played aggressively and got goals from Beatriz in the first half and then Ana Vitória in added time of the second half. Throughout the series, both nations played with attack-minded tactics, making the series nothing short of exciting.
Across the two matches, teenager Amanda Allen made her international debut while Zadorsky (Friday) and Jessie Fleming (Tuesday) were Canada’s players of the matches.

Canada are Olympic champions (Tokyo in 2021), two-time bronze medal winners (2012 and 2016), and two-time Concacaf champions (1998 and 2010). In all, Canada have participated in seven consecutive editions of the FIFA Women’s World Cup™ (1995 to 2019) and four consecutive editions of the Women’s Olympic Football Tournament (2008 to 2021). At Tokyo 2020, Canada Soccer’s Women’s National Team became the first Canadian team to win three consecutive medals at the Summer Olympic Games and just the third nation in the world to win three medals in women’s soccer.