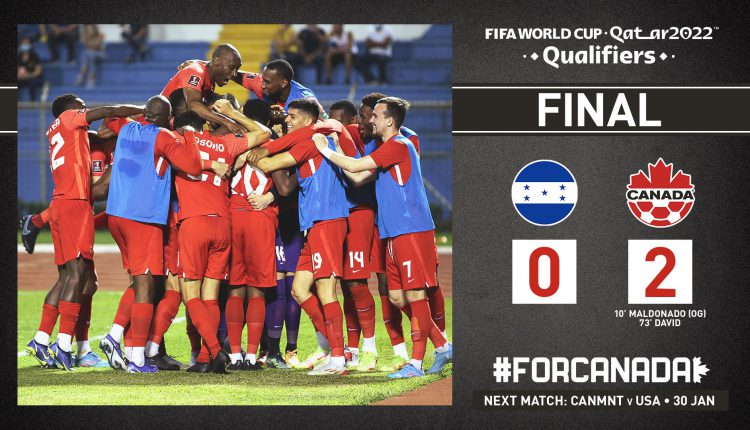 Canada To Host USA Next Sunday At Tim Horton's Field Canada moved a step closer to qualifying for the 2022 FIFA World Cup in Qatar on Thursday with a 2-0 victory on the road against Honduras.

The win not only heals Canadian soccer’s soul from a devastating 8-1 defeat at Estadio Olimpico Metropolitano in 2012, but it also keeps Canada atop the table and extends its lead over fourth-place Panama to five points, bolstering its hopes of automatic qualification for the World Cup in Qatar later this year.

David broke in on goal after receiving an inch perfect pass from Liam Fraser and chipped the ball over Honduras keeper Luis Lopez to secure the win in the 73rd minute for Canada, as they remained undefeated and at the top of the CONCACAF qualifying table.

Honduran defender Denil Maldonado’s 10th minute own goal, off a Tajon Buchanan cross, got Canada on the board in the first half.

Canada has 19 points after nine games, one more than the United States and two more than Mexico, who currently occupy the third and final automatic qualifying position in the standings.

“We wanted to come out here and put out a big performance, we knew the start of the game would be tough for us, that they would come at us, put a lot of pressure on us and we just wanted to make sure we were ready for the fight from the start, withstand their pressure and at some point we’d be able to play our game and that’s exactly what we did,” Captain Atiba Hutchinson said after the victory.

“We showed real character today, everybody fighting for each other like we always do to get a result here and it’s a special one because it’s been a long time waiting for us to come out here and do something big and we all did it today as a team, collectively.”

“We came in here to grind the result out and I thought that’s what the players did. We knew we had the quality in transition and we knew if we could manage the front three, which is a good front three in CONCACAF, we’d be ok,” head coach John Herdman said after the win.

“Milan came up big in some moments and I think we could’ve had them put to bed a little earlier with some of the transitional play, but all in all, three points, top of the group, still undefeated and we move on to the next game.

The U.S. would fascinatingly be more acclimatized to the conditions they are expected to face on Sunday night. They defeated El Salvador 1-0 in Columbus, Ohio thanks to a lone goal from Antonee Robinson in the 52nd minute of the game.

In the last 21 meetings between Canada and USA, the former have won just a single game. The USA has won 12 and seven games have ended as draws.

The last time these two sides clashed was in the reverse fixture of the 2022 FIFA World Cup Qualifiers and the game ended as a 1-1 draw.