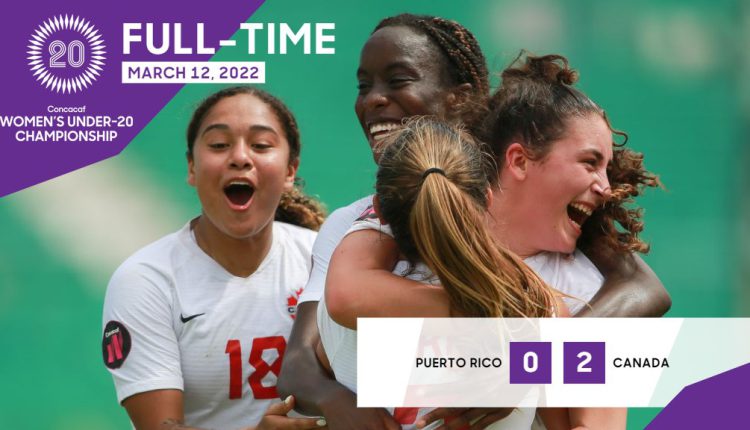 Zoe Burns and Florianne Jourde scored first-half goals as Canada dispatched Puerto Rico 2-0 in the third-place game at the CONCACAF U-20 Women’s Championship on Saturday to book its ticket to this summer’s FIFA U-20 World Cup.

The Canadian women lost their first crack at qualifying for the World Cup when they were beaten 1-0 by Mexico in Thursday’s semifinal. But they made no mistake in the third-place game, securing the last spot available.

The Canadians dominated on offence and turned up the pressure as the first half wore on. But the Puerto Rico defence held fast until goalkeeper JLo Ann Varada Vazquez and Canadian forward Olivia Small colli

A check by VAR prompted Mexican referee Katia Garcia to point to the penalty spot and Burns slotted home the spot kick in the 38th minute.

Less than minute later, Jourde volleyed home a Brooklyn Courtnall cross to give the Canadians all the offence they’d need to secure their World Cup berth. Canada had outscored its opposition 30-0 in winning five straight at the tournament prior to running into the Mexicans.

The championship game, which followed the Canada contest at Estadio Olimpico Felix Sanchez, pitted Mexico against the defending champion U.S. in a battle of 6-0-0 teams. The final was a repeat of the 2020 CONCACAF final, won 4-1 by the Americans. Canada lost 4-0 to the U.S. in the quarterfinals at that tournament.

The 2020 FIFA U-20 World Cup never took place, another victim of the global pandemic.

The top three teams at the CONCACAF championship join host Costa Rica in representing North and Central America and the Caribbean at the U-20 World Cup in August.

Canada coach Cindy Tye, a former Canadian international who doubles as coach of the Dalhousie women’s team, made six changes to her semifinal starting lineup.

Varada Vazquez was called into action in the 17th minute, punching away a cross by Courtnall — daughter of former NHLer Russ Courtnall and actress Paris Vaughan — and then stopping the header that came right back from Miya Grant-Clavijo.

Varada Vazquez made a diving save minutes later off Nikayla Small. Canada kept up the pressure, with Puerto Rico needed a goal-line clearance from a defender to deny Canadian captain Jade Rose from in-close.

The Canadians outshot Puerto Rico 13-0 in the first half.

Puerto Rico lost 7-0 to the U.S. in a semifinal that saw it outshot Puerto Rico 38-1 (21-0 in shots on target). The Americans won by the same score when the two teams met earlier in group play.

Still Puerto Rico outscored its opposition 14-1 in winning its four other matches at the 20-team tournament. The 20-woman Canadian squad is drawn mostly from NCAA schools.

Rose (Harvard University) and Olivia Smith (Florida State) each have won two caps with Canada’s senior squad. Goalkeeper Anna Karpenko (Harvard) and Small (Wake Forest) have also been called up by the senior team but have yet to play.

Canada won all three group-stage matches, dispatching St. Kitts and Nevis 7-0, El Salvador 4-0 and Trinidad and Tobago 5-0 before hammering the Cayman Islands 13-0 in the round of 16. The 13 goals against the Cayman Islands set a scoring record for a Canadian women’s national youth team.

The Canadian women survived a downpour in the quarterfinal to defeat nine-woman Panama 1-0.

Puerto Rico, led by Georgia State forward Brooke Hart’s five goals, was bidding for its first-ever trip to the U-20 World Cup.

Canada has qualified for seven previous editions of the FIFA U-20 Women’s World Cup, finishing runner-up in 2002 when a Canadian team featuring a young Christine Sinclair lost to the U.S. in sudden-death extra time before 47,784 at Edmonton’s Commonwealth Stadium.

That inaugural event was competed at the U-19 level with the event since switching to U-20. The Canadian women failed to qualify for the 2018 U-20 World Cup in France and did not get out of the group stage in 2016 in Papua New Guinea.

Canada hosted the event in 2014, losing to Germany in the quarterfinals.