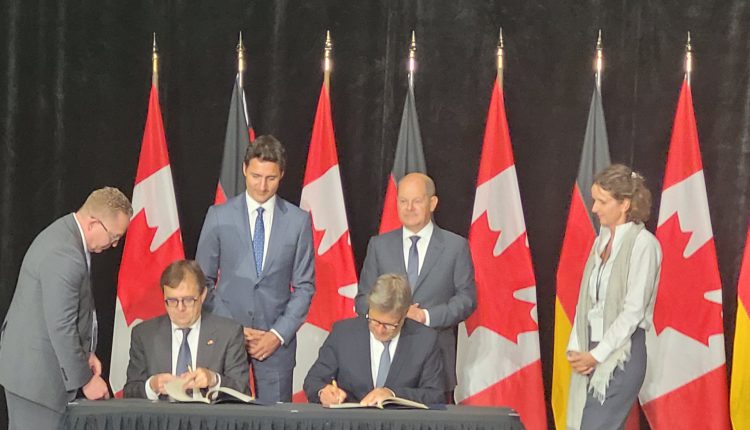 Namely, in a joint declaration, Prime Minister Justin Trudeau and German Chancellor Olaf Scholz outlined plans to “kickstart the hydrogen economy and to create a transatlantic supply chain for hydrogen.”

The plan is to make the first deliveries of Canadian hydrogen to Germany as early as 2025. Canada would also export hydrogen to the broader European market, as the EU looks to end its reliance on Russian energy.

Natural Resources Minister Jonathan Wilkinson and German Vice-Chancellor Robert Habeck signed the deal on Tuesday in the port town of Stephenville, N.L., where they attended a hydrogen trade show along with Prime Minister Justin Trudeau and Chancellor Olaf Scholz.

The five-page agreement is a “declaration of intent” to create a hydrogen alliance between the two countries.

Under the deal, Canada is largely responsible for ramping up production of hydrogen while Germany will focus on creating a shipping corridor to transport it across the Atlantic.

The German government is seeking long-term replacements for fossil fuels, both to meet its climate commitments and to end its dependence on Russia.

Chancellor Olaf Scholz says that even before the invasion of Ukraine, his country’s plans for net-zero emissions would have required importing large amounts of hydrogen.

He says there is great potential in what he calls the “wind-rich, thinly populated Atlantic provinces.”