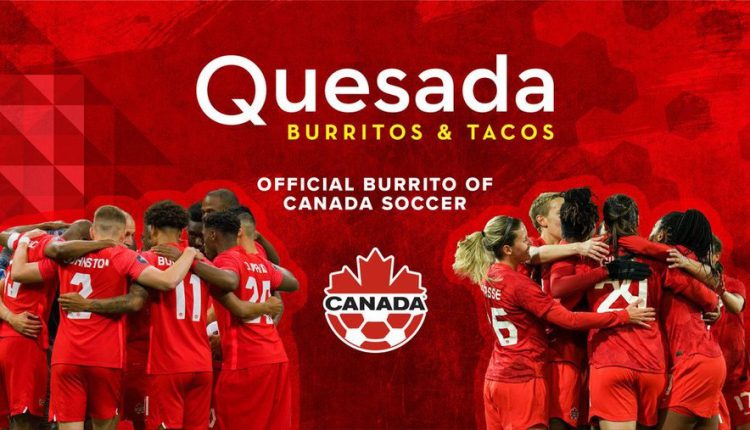 The multi-year deal, negotiated by Canadian Soccer Business, will support Canada Soccer’s Men’s and Women’s National Teams during upcoming FIFA World Cup campaigns – and beyond. Throughout the partnership, Quesada will rally millions of its soccer-loving guests across Canada to cheer on Canada Soccer’s National Teams, enter contests, enjoy themed menu items, and more.

“Canada Soccer is excited to welcome Quesada to our family of partners,” said Dr. Nick Bontis, President, Canada Soccer. “With the sport continuing to rise across our nation, the addition of dynamic and committed partners such as Quesada will help us to positively impact and support the Canadian soccer community from coast-to-coast. We look forward to growing together with Quesada as we move this partnership forward.”

Quesada is inspired by the flavours of Mexico and uses traditional spices and chili peppers throughout its menu, including in its made-from-scratch salsas and guac. Over the last 15 years, the chain has become a destination for Canadians hungry for mouthwatering burritos and tacos, made with authentic ingredients.

“The successes of our National Teams have fuelled a growing love of the sport among our guests, and all Canadians,” said Steve Gill, Founder & CEO, Quesada. “We’re excited to be able to offer our growing customer base another way to cheer on their favourite players and become more engaged in the game through this partnership.”