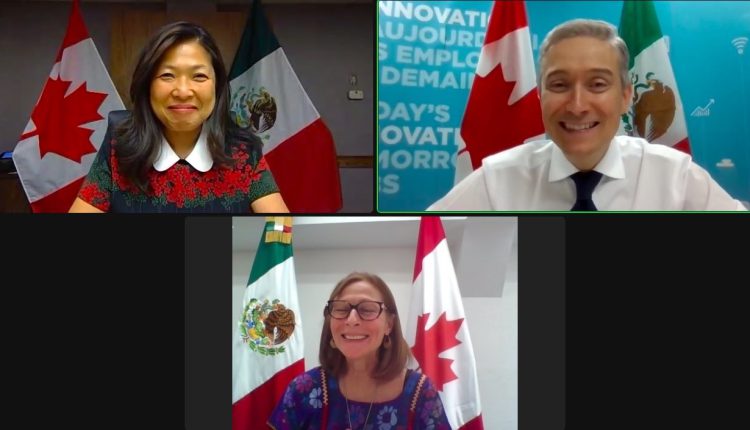 Ng and Champagne welcomed the meeting as an opportunity for Canada and Mexico to discuss ways to strengthen trade, investment, inclusive economic growth, and competitiveness by engaging constructively and collaboratively across a range of shared interests, according to a press release.

The ministers underscored that these dialogues are particularly important given the challenges in the global trade landscape directly resulting from Russia’s illegal invasion of Ukraine.

The ministers highlighted the competitive advantages shared by Canada and Mexico in sectors of the future economy, such as clean energy. They discussed the importance of workforce development and efforts to foster a collaborative business environment that enhances North American competitiveness and economic integration. In the discussions, Canada and Mexico agreed to ask the Business Council of Canada and Consejo Mexicano de Negocios (Mexican Business Council) to produce a joint study on private sector partnerships with actionable recommendations, and identify priority sectors for pilot programming.

Minister Ng and Minister Champagne also underscored the benefits of Canadian and Mexican bilateral investments, and seized the opportunity to reiterate Canada’s ongoing concern with the investment, business, and regulatory climate in Mexico, especially in the mining, energy, and biotechnology sectors. They also noted Canada’s recent request for consultations under Canada-United States-Mexico Agreement with respect to certain Mexican measures in the electricity sector.

The ministers emphasized the importance of building economies that support rules-based trade and inclusive economic growth that creates opportunities for equity-deserving groups, including women and Indigenous peoples. Minister Ng asked the Canadian embassy in Mexico to compile a list of Mexican supplier diversity programs, to identify opportunities for Canadian and Mexican small and medium sized businesses led by women, Indigenous peoples, and other under-represented groups to participate in integrated regional supply chains.

The dialogue concluded with the adoption of a joint statement outlining the importance of the economic and commercial relationship between Canada and Mexico and efforts to advance strategic initiatives on shared priorities.