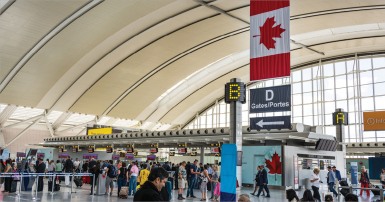 The federal government is leaning toward dropping the vaccine requirement for people entering Canada — ending random COVID-19 testing at airports — and making the use of the ArriveCan app optional by the end of this month, a senior government source told CBC News.

The changes, for arrivals at land, air and sea ports of entry, are planned for Sept. 30, but have yet to be finalized by the cabinet, according to four sources. The Globe and Mail is not naming the sources because they are not authorized to speak publicly on the matter.

Officials spoke to CBC on condition of anonymity, as they were not authorized to speak publicly on the matter.

The development was first reported by The Toronto Star and The Globe and Mail.

On Tuesday, a group of MPs and border city mayors published an open letter calling on the Canadian and U.S. governments to end their pandemic border measures, including Canada’s randomized testing regime.

The aviation and travel industries have been pushing the government to relax the rules for international travel, saying they discourage visitors and are out of step with many other countries as the pandemic eases, the Globe and Mail reported on Tuesday.

Canada’s health measures at airports and border crossings were in line with those of many other countries when they were adopted, but have remained in place for longer.

Most European countries dropped entry requirements related to COVID-19 before summer began, returning to prepandemic standards in a bid to welcome tourists after more than two years of widespread illness, lockdowns and stay-home orders.

The United States requires all entrants to be vaccinated, and it is not known if the requirement will be lifted at the same time as Canada’s. Although U.S. President Joe Biden declared recently that the pandemic is over, he said COVID-19 is still a problem.

People entering Canada use ArriveCan to submit their customs declarations, vaccination status and travel plans. It has been criticized as cumbersome, and a contributor to the lineups and logjams at many Canadian airports over the summer. The app told some people erroneously that they should go into quarantine.

Audrey Champoux, a spokesperson for Mr. Mendicino, did not address questions about the lifting of border measures, but said the government is working with industry to streamline the “process at the border and make travel easier and simpler for everyone.”