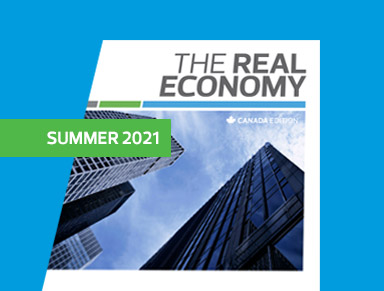 With lockdown restrictions lifting from coast-to-coast, the third edition of this year’s “The Real Economy: Canada” report examines what strong performances from Canada’s manufacturing and housing sectors mean for Canada’s long-term growth, and how that growth may be stifled due to ongoing trade tensions with the United States and lagging business investment. The report also shines a light on resiliency in the energy sector, and how Toronto and Vancouver have managed to recession-proof their economies.

Key findings in this quarter’s report include:

Despite the turmoil, the energy sector’s importance to the economy has increased over recent years

“Canada’s manufacturing sector has almost singlehandedly pulled the country out of recession in recent months, and this strong performance, coupled with promising signs from other areas such as real estate and energy, suggests that better days are ahead for the economy”, says Alex Kotsopoulos, partner, projects and economics with RSM Canada in the press release. “But there’s still plenty of work to be done on the trade front. Canada’s over-reliance on the U.S. leaves it vulnerable to any trade frictions that happen between the two nations, and we’re seeing that effect now as the Biden administration continues to focus first and foremost on rebuilding the U.S. economy.”

American Tourists To Enter Canada As Of Aug. 9th