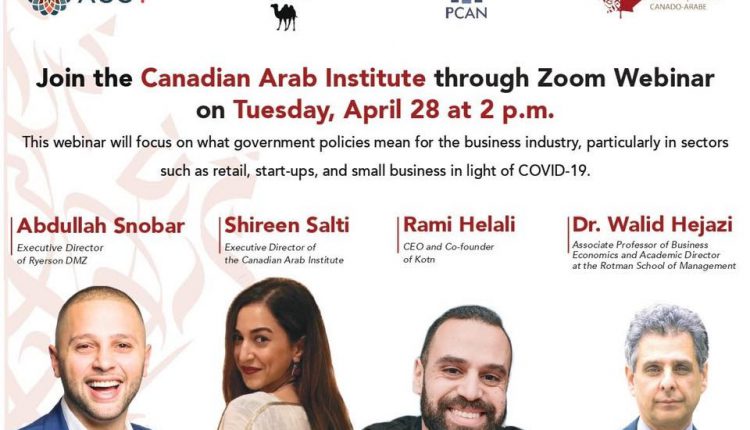 A number of economic experts have agreed that the Canadian economy is heavily reliant on small business and the growth rates in the economy, comes actually from small business not the large one, noting that the situation is going to be very difficult for the next three to eight months.

“It’s indeed a critical time for everyone particularly this environment for small business, you know, Canada has something on the order of 1.3 million businesses operating at any given time, and a whole 98%, or are small businesses, which employ eight to 9 million people. So that’s about 70% of that labour force in Canada is in small business,” Dr. Walid Hegazy, Associate Professor of Business Economics and Academic Director at the Rotman School of Management, said during a webinar, held by the Canadian Arab institute.

“The Canadian economy is heavily reliant on small business and if you look at growth rates in the economy, much of that does not come from large business that comes actually from small business, but another important point to note is that even in the best of times there’s a lot of churn among business so ever, on any particular year, there might be about 100,000 new businesses created, but about 80 or 90,000 are going to disappear in the best of times, it’s tough going, but given the current situation, many small businesses are experienced perhaps the most difficult period in their often short lives but very very difficult. So there’s two buckets of businesses. And I think in giving this kind of a conversation,” he added.

“It’s absolutely incumbent upon owners of small businesses to ensure that there’s absolute confidence in their clients and their customer, but also when their employees, so that they can and the word that, that you have to put in your mind is the word trust. The idea that they can trust coming back to work. Employees can trust the idea that when I go back to work. I will not get sick, but secondly, that’s where all of the customers that come into my facility that they can also trust that you are doing the absolute best that you can to protect them. The worst possible thing that you can do as a small business owner is to have a facility, such as a little store or a little restaurant, a customer walks in and sees that social distancing is not being respected, that’s going to have a dramatic impact on your business.”

“Now, and going forward. So I’ll have more to say. But the high level is that it’s going to be very difficult for the next three to six to eight months. You have to do your best to try to get through I know that’s easier said than done. But the two points that are important is to the extent that you can maintain those relationships with your employees, and make sure you build trust with your employees, and your customers so they will come back one life is back to normal,” he said.

For his part, Abdallah Snobar, Executive Director of Ryerson DMZ, said that this is probably if not the most challenging time for startups, noting that this has really been a kind of a great test for founders and companies to be able to kind of see how they would go through this period.

“We are going to come out of this and I think and I hope we’re going to come out stronger than we were before and. And I do have to say that, you know, start before the six seven weeks ago Toronto was positioned as and even Canada was becoming positioned as one of the most innovative hubs for technology in the world, and that momentum, you don’t want to lose you want to make sure that you maintain as much as possible and you know there are some challenges that we’ve been seeing over the past few weeks that have been extremely evident in the startup community,” Abdallah said.