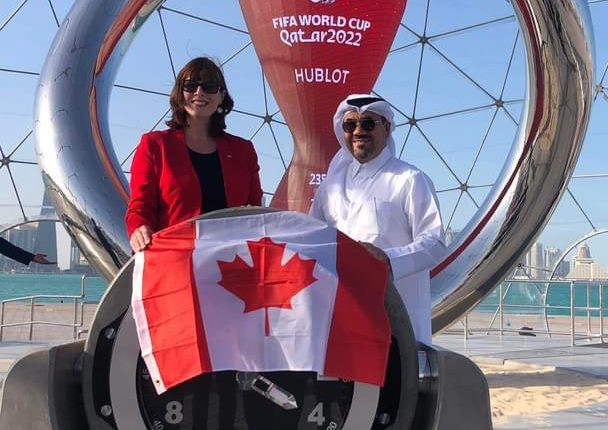 The Canadian flag has been raised along with eight other flags, whose national teams qualified recently to the Mondial, ahead of the competition’s draw on Friday.

The ceremony was attended by Ambassador of Canada to Qatar Stefanie McCollum. The Supreme Committee for Delivery and Legacy (SC) the ceremony to celebrate the qualification of nine teams to the World Cup, they are; Canada Morocco, Tunisia, Portugal, Cameroon, Ghana, Poland, Ecuador and Senegal.

The ceremony was held at the Corniche, with Secretary-General of the SC Hassan Al Thawadi and CEO of FIFA World Cup Qatar 2022 LLC. Nasser Al Khater, Secretary-General of Qatar Football Association Mansour Al Ansari, Chief of Tournament Experience Khalid Al Mawlawi, Ambassador of Morocco to Qatar Mohamed Setri, and representatives of the qualified countries’ embassies to the state.

Ambassador McCollum told Qatar’s News Agency (QNA) she was proud to see her country’s flag raised along with the other teams that reached the World Cup in Qatar. She added she was delighted that Canada will make a comeback to the World Cup following an absence for 26 years. She said that the Canadian fans will show great support to their national team.

She praised Qatar’s preparations for the event, whether in terms of stadium or the infrastructure. She said she expects the special atmosphere of the competition will be a joy for fans. She also highlighted that the World Cup in Qatar will be the only competition in the world where fans can watch more than one match a day, due to the proximity of all stadiums. McCollum said she expects the World Cup in Qatar to be one of the best competitions, thanks to the fans passion for football.