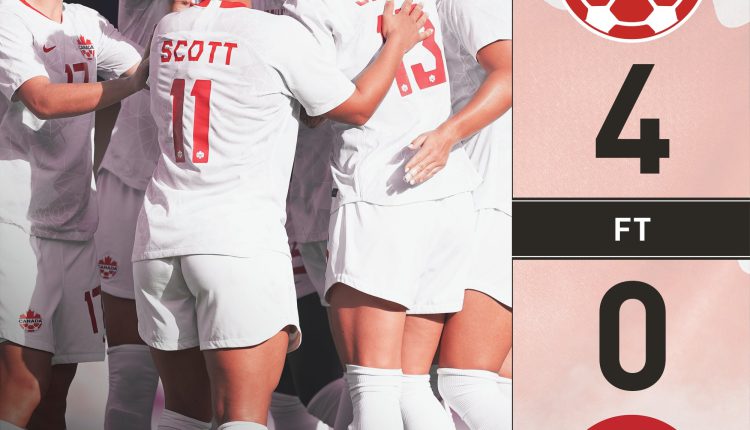 Despite missing captain Christine Sinclair and other veterans through injury, Canada coach Bev Priestman got two wins and some young players putting up their hands in the October FIFA international window.

Evelyne Viens scored one goal and helped set up two others Monday as Canada defeated Morocco 4-0 in an international women’s soccer friendly, following a 2-0 victory Friday over Argentina.

“It’s getting more and more exciting as a coach when you look down your bench — whoever starts, whoever finishes, you know that the whole team has a contribution towards the win,” said Canada coach Bev Priestman.

Viens, 25, notched her third goal in her 12th Canada appearance and was a threat all game.

“She just looks like she’s enjoying herself rather than have the weight of the world on her shoulders â¦ I just asked her to relax and do exactly what she does at (her) club. And arguably she’s done that. I’m really happy for her,” Priestman said of Viens, who plays for Sweden’s Kristianstads DFF.

The pacey 23-year-old Larisey opened her senior scoring account in her third appearance.

And a pair of 19-year-olds excelled. Jade Rose started at centre back and looked calm and composed while midfielder Simi Awujo impressed off the bench.

It took a while to get going, however.

Morocco, ranked 76th in the world, proved to be a stubborn opponent to break down. The seventh-ranked Canadians had 73 per cent possession in the first half but only managed three shots on target with Fleming providing the go-ahead goal in the 24th minute.

“The first half I was really disappointed … Second half, I liked the response,” said Priestman.

“There’s never an easy international,” she added. “These teams are resilient and they’ll do anything to try and make your lives difficult in these games â¦ At the end of the day 4-0 I’ll take it across 90 minutes. I just wish we could get that first-half performance back.”

The Atlas Lionesses, headed to their first-ever World Cup, were runner-up to South Africa at the Women’s Africa Cup of Nations in July.

Canada downed No. 31 Argentina on Friday in Sanlucar de Barrameda, Spain, taking the lead on a 68th-minute Argentine own goal and 87th-minute strike by substitute Cloe Lacasse. Morocco lost 4-0 to No. 32 Poland last Thursday in Seville, Spain.

Priestman made six changes to her starting lineup inserting goalkeeper Sabrina D’Angelo, Desiree Scott, Jade Rose, Viens, Lacasse and Quinn, who goes by one name. The starting 11 came into the game with a combined 730 caps with 416 of those coming from Scott, Fleming and Kadeisha Buchanan.

Scott, earning her 184th cap, took over as captain from Fleming.

Morocco hung back in an effective defensive block, looking to counter-attack. The Canadians had more of the ball but struggled to build on offence in a drab start to the contest.

That changed in the 24th minute when a poor clearance by Morocco goalkeeper Khadija Er-Rmichi was intercepted by an opportunistic Viens, who found an onrushing Fleming in the penalty box. The Chelsea midfielder steamed past defender Nouhaila Benzina and beat Er-Rmichi for her 19th goal in 109 internationals.

Viens doubled the lead in the 54th minute, rising high to head the ball home for her third international goal. The play came off a Canada corner that was initially cleared but only as far as Schmidt, who sent a fine cross back into the penalty box.

A minute later, Schmidt hit the crossbar with a header of her own off another corner. Er-Rmichi got a hand to a hard Prince shot from the edge of the penalty box in the 80th minute.

Priestman sent on Shelina Zadorsky, Nichelle Prince and Schmidt to start the second half. Quinn, who had been seemingly favouring an ankle, was one of the players replaced.

Awujo, Larisey and Zoe Burns followed off the bench as the game wore on.

A long-range shot by Morocco, its lone effort on target, produced a diving save from D’Angelo in the 48th minute after a turnover by Schmidt.

Beckie made it 3-0 in the 84th after a fine feed from Schmidt. With no defender pressing, Beckie had time to choose her spot, knocking the ball in off the far post for her 36th goal in 98 appearances for Canada.

Larisey finished the scoring in the 90th minute, taking advantage of a fine through ball from Viens. An onrushing Er-Rmichi blocked the ball initially but it rebounded to Larisey who poked it home for her first Canada goal.

With their fourth straight win, the Olympic champion Canadians improved to 10-2-3 this year with the losses to the U.S., 1-0 in the CONCACAF W Championship final in July, and Spain, 1-0 in the Arnold Clark Cup in February.