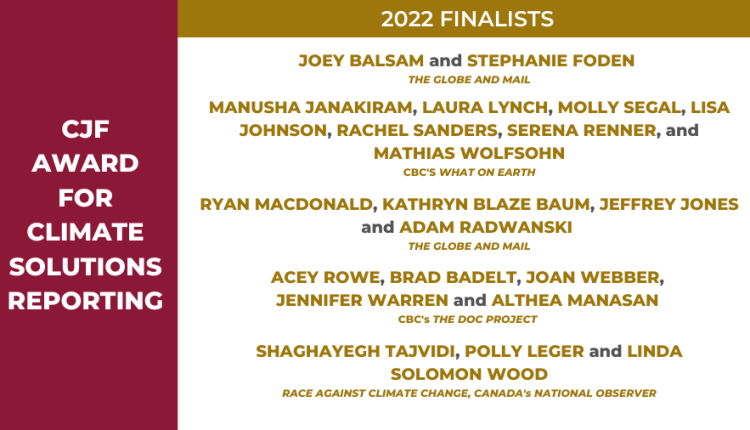 The Canadian Journalism Foundation (CJF) has announced its shortlist for the annual CJF Award for Climate Solutions Reporting that celebrates a working journalist or team of journalists whose work shines a spotlight on climate change and innovative solutions in Canadian print, broadcast or online news reporting.

“The issue of climate change is existential, and we are seeing irreversible impacts in our communities,” says Diane Flanagan, Vice-President of Corporate Affairs and Communications at Intact Financial in a news release. “At Intact, we are actively addressing climate change, focusing on practical solutions at the homeowner, business, community and country levels. We are proud to sponsor this award that celebrates Canadian journalists’ important work on the climate crisis.”

The five finalists for this year’s award and the stories or series shortlisted are:

Joel Balsam and photojournalist Stephanie Foden for their Globe and Mail reporting on an Innu band council and regional municipality’s attempt to declare Quebec’s Magpie River a legal person – which would be a first in Canada. In practice, this would mean that the river’s human guardians could take legal action if the river is polluted by other actors.

The team of journalists behind the CBC Radio series What on Earth, which includes Manusha Janakiram, Laura Lynch, Molly Segal, Lisa Johnson, Rachel Sanders, Serena Renner and Mathias Wolfsohn, for telling stories that highlight the human and natural costs of rising emissions and what can be done about it. What on Earth won the inaugural award last year.

The Globe and Mail‘s team of climate journalists, which includes Ryan MacDonald, Kathryn Blaze Baum, Jeffrey Jones and Adam Radwanski, for their narrative-shifting stories on how to reengineer the economy to adapt to and capitalize on climate change.

The team of journalists behind the CBC’s The Doc Project podcast, which includes Acey Rowe, Brad Badelt, Joan Webber, Jennifer Warren and Althea Manasan, for “Big Tree Hunt,” an episode exploring the issue of ancient tree logging in British Columbia from different perspectives.

“The reporting from these finalists took us on a hopscotch across the provinces and touched on topics ranging from small businesses innovating on climate solutions to the photography of old growth forests,” says jury member Madeleine Orr, founder of The Sport Ecology Group and lecturer at Loughborough University London in England. “These journalists offered reasons to be optimistic about Canada’s future amid the climate emergency. Thank you also to the editors and producers who have embraced climate journalism.”

Wolf Performance Hall in London Hosts Fresh off the Plane

Bank of Canada To deliver interest rate hike next Wednesday