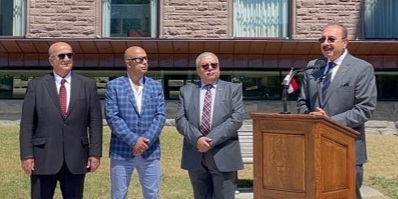 The Egyptian flag has been raised outside the building of the Legislative Assembly of Ontario in Canada for the fourth consecutive year on the anniversary of the July 23 revolution and celebrating the Egyptian Heritage month.

The flag-raising ceremony was attended by MPP Sheref Sabawy, President of the Canadian Egyptian Heritage Association, Dr. Magdy Nashaat, the board member of and director of public relations Albert Fahmy, the CEHA Media Coordinator, Magdy Yashoue, and a number of Egyptian community leaders and media men. MPP Sheref Sabawy told MEDIAinTORONTO that he congratulates the Egyptian community on the occasion of raising the Egyptian, stressing that the continuation of this ceremony for the fourth year in a row is an explicit recognition by the government of the importance of the Egyptian community in the country and its active role in Canadian society in various domains.

In 2019, MPP Sheref Sabawy submitted Bill 106 to the Parliament of Ontario, requesting to dedicate a month to celebrating the Egyptian community in Canada and their culture. Shortly afterwards, Egyptian Heritage Month became a “permanent celebratory month for generations to come”.