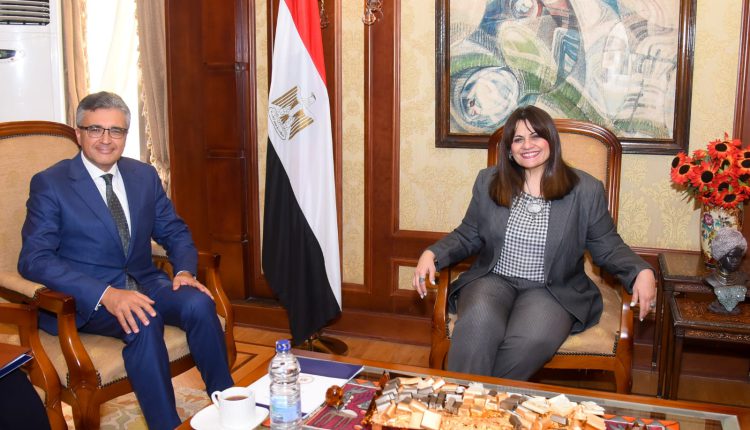 Ambassador Soha Gendi, Minister of State for Emigration and Egyptian Expatriates’ Affairs, on Thursday, received Ambassador Mohamed Fakhry, Consul General of Egypt in Canada, to discuss strengthening cooperation and joint coordination to meet the needs of the Egyptian community, and ways to integrate them into development plans.

The meeting was attended by Ambassador Amr Abbas, Assistant Minister of Immigration for Communities Affairs.

For her part, Ambassador Soha Gendi, welcomed Ambassador Mohamed Fakhry, wishing him success in his new mission, stressing the continuation of cooperation and coordination with the Ministry of Foreign Affairs and the Egyptian embassy and consulate general in Canada, in light of the state of integration of efforts to meet the needs of the Egyptian community.

The “An Hour with the Minister” initiative aims to provide an opportunity to meet directly with Egyptians abroad and get acquainted with their needs and inquiries, affirmed Minister of State for Emigration and Egyptian Expatriates’ Affairs Soha Gendi.

The minister of immigration indicated to coordinate with Phoebe A. Wasfy, Principal of the Philopateer College in Canada, to organize a trip for Egyptian students at the school in December, to visit Egypt and see the true beautiful face of their country by learning about national projects and new cities.

For his part, Ambassador Mohamed Fakhry, Consul General of Egypt in Montreal, expressed his great appreciation for the role played by the minister in linking Egyptians abroad to their mother country and welcomed the joint cooperation in the framework of strengthening the national identity of Egyptians in Canada and benefiting from their experiences and standing on all their needs to serve the community.

Ontario Unveils Next Steps Of Plan to Catch Up