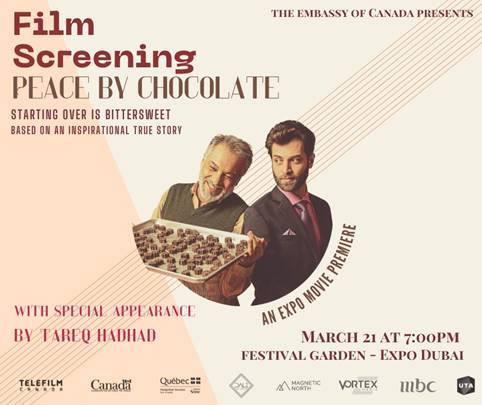 The Embassy of Canada, along with Immigration, Refugees, and Citizenship Canada (IRCC), and in partnership with the Canada Pavilion, Telefilm Canada, and the Global Refugee Sponsorship Initiative (GRSI) will host the UAE premiere of Peace by Chocolate, opened by a keynote address from Tareq Hadhad, whose life story was the inspiration of the film. A Q&A session will take place after the film with Tareq Hadhad and the film’s producer. The keynote address, film screening and Q&A session will take place on 21st March at the Festival Garden, Expo 2020 Dubai  Register here https://bit.ly/3I8cAWQ #Expo2020

The world is facing a refugee crisis. Across the globe, millions are displaced and longing for what most of us take for granted: a safe place to call home. Canada’s Private Sponsorship of Refugees Program is a world-leading initiative, helping it welcome more refugees and better equipping them for lasting success. Since it began over five decades ago, private sponsors have welcomed more than 350,000 refugees to Canada. This program is now emulated all over the world, from the United Kingdom and the European Union to New Zealand, while the US has committed to creating one as well.

The event seeks to highlight the importance of refugee sponsorship initiatives in both providing permanent resettlement for those in need of protection as well as the benefit refugees bring, both economically and socially to receiving nations. Starting at 7 PM, Tareq Hadhad will deliver a keynote address to the attending public. Sometimes a story comes along that every person on earth should hear – the story of Tareq Hadhad and his family is one.

Once a displaced Syrian refugee, Tareq will share with the audience the feelings and fears that gripped his family and millions more as their home city of Damascus – the oldest city in the world – fell into a bitter and lasting conflict. From family and happiness to war and heartbreak to a second chance – a Canadian dream – that rightly instills a sense of pride in every audience.

Tareq’s story is moving, powerful and one that every global citizen needs to hear. His story has been shared on a world stage, in front of global leaders including the United Nations and Barack Obama. Justin Trudeau shared the story of Tareq and his family to the UN – in an effort to reshape how everyone in the room and around the world thought about immigrants and newcomers. This event hopes to also reshape and reframe how the audience views the value of refugees, shifting the narrative to one of burden to one of opportunity and potential.

Following Tareq’s keynote address, the movie based on the story of his family will be

screened. ‘Peace by Chocolate’, directed by award-winning story-teller Jonathan Keijser, tells the heart-warming true-life story of Canada’s immigration policies done right. The movie stars beloved late Syrian film star Hatem Ali, and was his final feature film before his premature death in 2020. The film was executively produced by Chadi Dali, himself a Syrian-Canadian.

The film premiered at the Tribeca Film Festival, and has won numerous prizes at the other festivals it has been shown at, including but not limited to: Canada WNT to play 2 friendlies vs Nigeria in B.C.