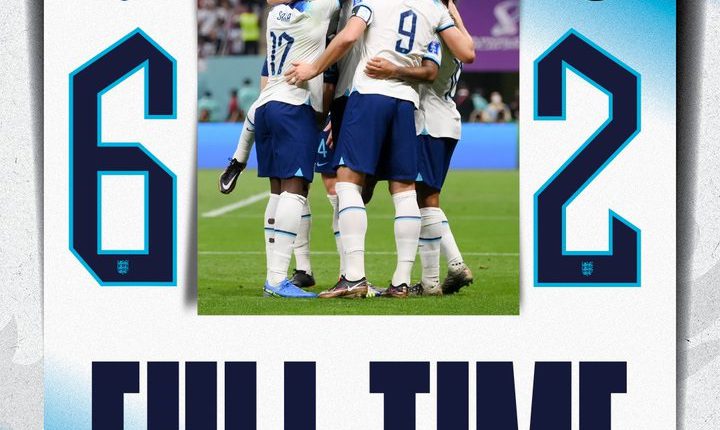 England thumped Iran 6-2 to kick off their World Cup 2022 campaign in style as they enjoyed the perfect start to Group B.

England had come close to taking the lead in the Group B opener, with Harry Maguire heading against the crossbar, before Bellingham, 19, steered in a header from a Luke Shaw cross in the 35th minute. Eight minutes later, England doubled their lead when Maguire climbed highest from a corner to head down for Saka to score.

Sterling flicked in a cross by captain Harry Kane in first-half stoppage time before Saka bamboozled Iran’s defence and made it 4-0 in the 62nd minute. Mehdi Taremi narrowed the gap for Iran three minutes later but Rashford made it 5-1 and Grealish, also coming off the bench, scored England’s sixth. Taremi scored a consolation second goal for Iran from the penalty spot in the dying seconds

Gareth Southgate won’t have many complaints as the Three Lions took a big step towards the World Cup knockout stages ahead of games against USA and Wales.