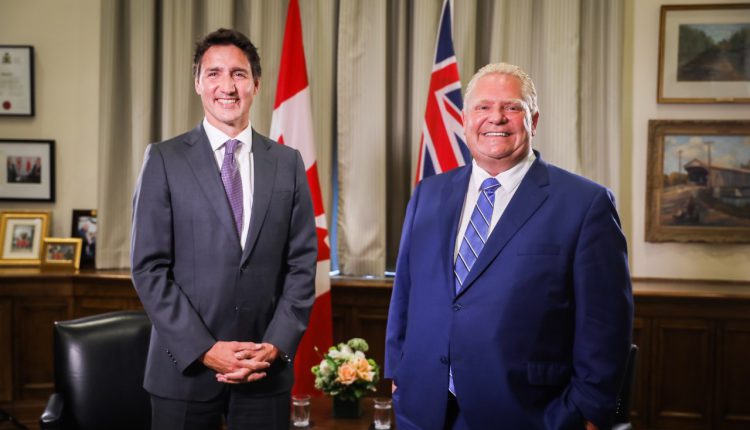 Ontario Premier Doug Ford held a productive meeting with Prime Minister Justin Trudeau on Tuesday at which health-care was the top priority item.

The two leaders met at the Ontario legislature, after which Ford spoke to reporters.

Ford says pending legislation that would force patients in hospitals awaiting long-term care to nursing homes not of their choosing was discussed at his meeting with Trudeau.

Ford shared few details about that part of their conversation but says both men agree “that the status quo is not working” when it comes to health-care delivery, as hospitals in the province struggle with a nursing shortage that has forced some emergency rooms to temporarily close for hours or days at a time in recent months.

Following the announcement of new federal investments in housing made by the Prime Minister in Kitchener, Ontario earlier in the day, the two leaders spoke about the need for further collaboration on housing. They discussed investments proposed in Budget 2022 to help put Canada on a path to double housing construction and meet Canadians’ housing needs over the next decade, according to a news release. These measures include plans to launch a new Housing Accelerator Fund to incentivize cities and towns to get more housing built, and investments to increase the supply of affordable housing through programs such as the Rapid Housing Initiative.

The Prime Minister and the Premier discussed the significant investments made by Canada and Ontario to support the development of electric vehicles and create jobs in the province. They further discussed the potential of the Ring of Fire to provide the minerals necessary to make batteries for electric vehicles. They also spoke of the importance of ensuring projects meet environmental standards and benefit Indigenous communities.

Prime Minister Trudeau and Premier Ford recognized labour shortages in Ontario and committed to continue working collaboratively on their shared objective of welcoming the number of newcomers necessary to help support the province and the country’s economic recovery and growth.

They also spoke about pressures on the health care system and the importance of funding and accountability to deliver for Canadians. The Prime Minister emphasized that the Government of Canada is committed to continue working with provinces and territories to support public health systems that deliver quality health care for all Canadians.

The Prime Minister and the Premier agreed to continue working together on these and other issues of importance to both governments.