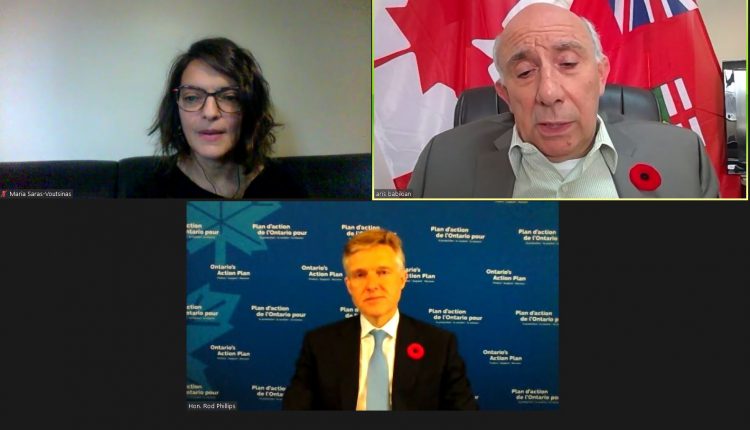 Shady Salah – Media in Toronto
Ontario Minister of Finance Rod Phillips, on Friday, said that the government will do what it takes to get the province and its people through the pandemic. Speaking to a virtual event to discuss 2020 budget with cultural Media, the minister said “This budget that we laid out a three year plan yesterday is really in many ways. The document that is validating the promise that we see myself and Premier Ford have made to the people of Ontario that we will do what it takes to get this province and to get its people through the pandemic and so we’ve divided the actions we are taking and have taken this year into three categories.”“Things that are done to protect particularly the health care or long term care we have things that we’re doing to support communities and families, parents and seniors”.
Responding to a question from MEDIAinTORONTO, regarding how much deficit expected to be added to spending over the next three years? The minister said “38 and a half billion dollars is the deficit that I projected for the province of Ontario back at the end of the first quarter in August. That is the deficit number that we are now projecting for this year that drops to 33 and then to 28 billion over the successive years.”
“One of the other features of the budget is quite unique and now the Bank of Canada, and others have come out and said that they will do things the same way as we’re introducing scenarios. So, there are scenarios in the budget that also look to either a stronger economic recovery, or a weaker economic recovery in either of those cases the deficit reduction adjusted. And we think this is why it’s in fact what the IMF has recommended and we’ve been one of the first jurisdictions to take it up,” Mr. Rod Phillips said, noting that the government have created a mainline expectation that’s the deficit numbers I just quoted, “but we’re also giving Ontarians, you know before unheard of transparency about potential volatility and I think that’s only sensible given the volatility in the global economy, and of course in the North American regional economies as well.”