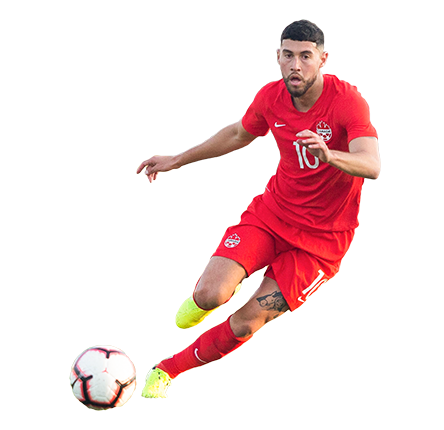 Canada will be without Toronto FC midfielder Jonathan Osorio for the upcoming 2022 World Cup preparation friendly against Uruguay on Tuesday, the federation has announced.

The 30-year-old homegrown standout has been recovering from a head injury he’s described as causing “neurological dysfunction,” stemming from a collision in the Reds’ July 13 match at Chicago Fire FC.

The 43rd-ranked Canadian men to play No. 11 Uruguay tomorrow in Bratislava, Slovakia. The team will also be without Captain Atiba Hutchinson, who is dealing with a bone bruise sustained in pre-season with Turkey’s Besiktas.

Midfielder David Wotherspoon is also missing due to injury. Defender Doneil Henry, currently sidelined by a hamstring issue, is in camp with Canada but in a non-playing role.

Osorio missed Canada’s ill-fated camp in Vancouver in June, which was disrupted by a pay dispute, after an injury sustained in an earlier game against Chicago. At the time, Toronto coach Bob Bradley described it as “lower body discomfort.

Osorio, who is making US$1.026 million this year, is out of contract after this season.

He has had medical problems in the past. In 2017, he had an irregular heartbeat and in 2019 suffered from anemia.

This time, he said the injury affected his mental health, with anxiety over what might be causing his distress.

“It was just hard. It was just hard to really figure out what it was. We couldn’t figure it out,” he said. “I start to feel good after some rest and then I come back to the field and as soon as we ramp it up, I start feeling horrible again. It was tough.”