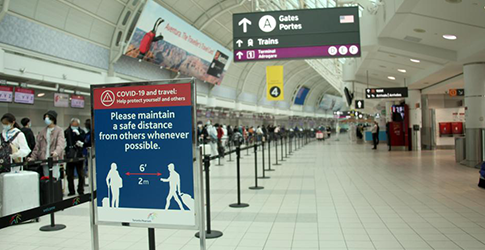 Six MPPs of Mississauga on Sunday called on the federal government to ban non-essential travel into the country as the province is in the midst of a third wave caused largely by variants of concern, which entered the Canadian borders earlier this year.
This came in a letter sent to their federal counterparts in Mississauga, urging them to ask the federal government to act, ban all non-essential travel, and close the land border loophole.
The letter, signed by MPP Khaled Rasheed, MPP Deepak Anand, MPP Sheref Sabawy, MPP Nina Tangri, MPP Natalia Kusendova, and MPP Rudy Cuzzetto, says:
Dear MP Peter Fonseca, MP Gagan Sikand, MP Navdeep Bains, MP Omar Alghabra, MP Iqra Khalid, and MP Sven Spengemann, Thank you for your ongoing support and collaboration throughout the COVID-19 pandemic. We are writing to you today on behalf of our constituents in the six Mississauga ridings. As you know, Ontario is in the midst of a third wave caused largely by variants of concern, that entered our borders earlier this year. Recently, Ontario confirmed 36 cases of the B.1617 variant first identified in India. These cases were associated with international travel. This is extremely concerning for our constituents in Mississauga, many of whom have seen on the news the devastating impacts of this variant in India and other countries. Ontario has also seen thousands of confirmed cases of the P.1, B.1.1.7 and B.1.351 variants. Variants of concern now make up approximately 70% of daily new cases in Ontario. They are more easily transmissible and deadly, and continue to have a devastating impact on our hospitals and Intensive Care Units. These COVID-19 variants arrived in Ontario through our airports and border crossings. Since last year, our government has been calling for strengthened measures to prevent these deadly variants from entering the province, so we can protect Ontarians. The people of Mississauga require immediate leadership from our federal government to prevent this crisis from getting worse. Earlier this week, your government announced a ban on direct flights from India and Pakistan. While we welcome this step, it does not address the severity of the crisis we are facing. We, the six Members of Provincial Parliament representing Mississauga, request our federal counterparts immediately: 1. Close the borders and ban all non-essential travel. 2. Close the loophole that allows travellers to enter at land borders and avoid quarantining at authorized government hotels.

As you know, Mississauga is home to Pearson International Airport, the busiest airport in Canada. This last week alone, nearly 10,000 foreign national travellers entered through this airport. In the past week, 22 international flights have landed at Pearson with possible COVID19 exposures. These numbers are staggering and should be a wakeup call that further action is needed. Additionally, nearly 80,000 people – not including essential commercial truckers – have crossed Canada’s land borders in the last week alone. Our government has stepped up and taken action to protect our borders, an area that is a federal responsibility. We were the first jurisdiction in Canada to bring in mandatory COVID-19 airport testing. Further, we issued an Emergency Order restricting travel into Ontario through land and water crossings from Manitoba and Quebec. However, we need immediate support from the federal government to secure our international borders. The people of Mississauga, many of whom are essential workers, have made sacrifices every day throughout this pandemic. It is only right that all levels of government do everything in their power to limit the spread of this deadly virus and protect the health and safety of all citizens. We urgently ask that your government act, ban all non-essential travel, and close the land border loophole, to prevent this crisis from getting worse. Thank you.