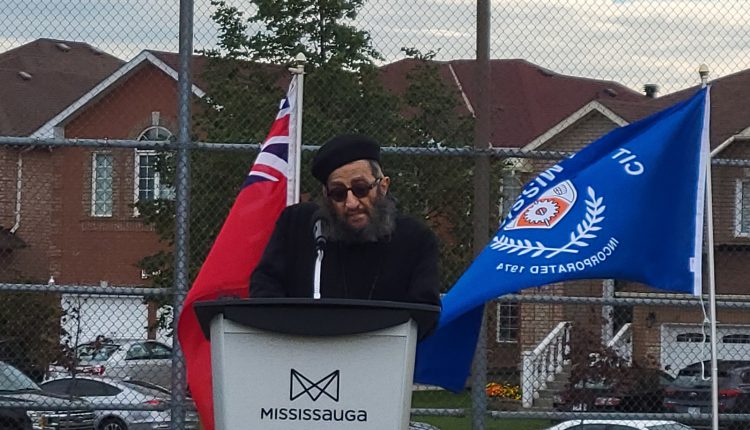 Dignitaries celebrated Father Saad and his many contributions to the community with a plaque unveiling and tree planting ceremony. The Egyptian ambassador stressed in his speech that this honoring of Father Saad comes in appreciation of his effective role in serving the people of the Coptic Orthodox Church and Canadian society for nearly 40 years, pointing out that Father Angelos Saad is a model of giving and serving the members of the community. And an honorable example of the ability of Egyptians in the diaspora to integrate into their new societies and actively participate in their development activities, especially the Egyptian community in Canada, which has been able over decades to enrich Canadian culture and society with various contributions.

He added that it is a matter of pride for every Egyptian to hear words of praise from the Mississauga City Council and its mayor, for the contributions of the Egyptian community in the reconstruction of the city over many decades, and for the doctors, engineers, pharmacists, and university professors that the Egyptian community has provided, who have contributed to the development and renaissance of the whole of Canada and not just the Toronto and suburbs area.

Father Angelos Saad Park is one of the few parks in Mississauga with outdoor workout equipment. It also includes a splash pad, playground, baseball diamond, and two soccer fields.

It is worth mentioning that Father Angelos Saad began his service as a priest in the Church of St. Takla in Alexandria, then moved to serve in Canada, where he established many care homes for children, schools, charities, and food boxes, in addition to founding the Museum of Pharaonic Civilization in Mississauga.

He was born on January 29th, 1950 in El-Behera, Egypt. His name of birth is Philip Mikahil.

He was ordained as a priest by His Holiness Pope Shenouda III on Sunday, September 3rd, 1978, and has served in ordained ministry in Alexandria, Seattle, then in Mississauga since September 1989.
• He is chairman of the Board of Directors and senior priest of the Church of the Virgin Mary and St. Athanasius
• President of the Canadian Coptic Centre and Aghabi, providing non-profit housing for low-income families.
• He also is the chairman of the Board of Directors of Anba Abraam Charity, which serves more than 20,000 people in need annually in Mississauga and elsewhere.
• AAC currently operates three food banks in Mississauga and services a significant percentage of users of the food bank system in Peel.
• He established and manages two private schools, Philopateer Christian College, and established and manages two daycare centers for over 250 children.
• Currently he is establishing 2 youth centers and churches to focus on young couples and youth in Mississauga.

And among his many other areas of service—the Coptic Community Centre, Seniors Centre, Senica Seniors Daycare, Second Career Training Center, and Newcomers Service Centre, which helped give start to many when they first arrived in Canada. Cisco Announces Participation as IT Services Provider at COP27