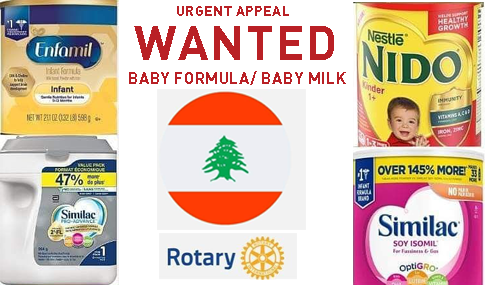 Activist groups have launched several calls for donations to send infant baby formula to the crisis-hit Lebanon.
Lebanon has been running short of infant baby formula for months as the country has been dealing with a severe economic crisis.
Shortages of infant milk formula are one facet of a food security challenge brought on by economic collapse and worsened by Lebanon’s reliance on imports for basic necessities.
The country, once described as Switzerland of the Middle East, is on the verge to become a failed country, as the international community insists to bind aids with political and economic reforms.
Distributors are accused of holding on to units of baby formula in anticipation of lifted subsidies so they can profit more – sparking concern over the loss of morality.
“The shortage is related to the planned removal of government subsidies on these products and the hoarding of these items by large distributors to make more money. These criminals buy the baby formula subsidized by the government, hoard it in warehouses and then sell it for 3-5 times the amount once the subsidies are removed,” Wasim Jarrah, Organizer, and fundraiser for Lebanon Strong Initiative told MEDIAInTORONTO.
Since late 2019, the country has suffered an economic crisis after decades of economic mismanagement, corruption, and scarcity in foreign currencies that have limited imports.
He pointed out to the role played by Hezbollah, underlining that the “militia and many other groups have been smuggling much-needed medication, gasoline, diesel fuel, and foods into Syria leaving the Lebanese without much-needed supplies and food and standing in lines for hours to fuel their vehicles and heat their homes. “
“The goal is to help in any way we can. We have launched this initiative to get much-needed assistance there right now. I am getting calls from all over Canada to see how they can help,” he said.
In Canada, there are two ways to send the baby formula to Lebanon, according to Jarrah: First: Through Dina Bakhit and her shipping company in Canada. Donors can drop off baby formula to her Mississauga location and she will be shipping it to Lebanon. The other way is through 25,000 containers which still need to be paid for, from a company in France that can ship them to Lebanon within a few days.
Many Lebanese citizens have resorted to bartering on Facebook groups to provide for their basic needs, as the country sinks deeper into an economic crisis, offering clothes for the much-needed baby formula.

You can donate here