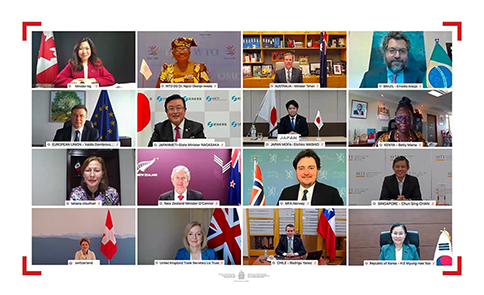 Honourable Mary Ng, Minister of Small Business, Export Promotion and International Trade, on Monday, wrapped up a successful meeting of the Ottawa Group where ministers discussed progress on WTO reform efforts and identified key priorities in the lead up to the 12th WTO Ministerial Conference (MC12) and beyond.
The ministers welcomed the recently appointed WTO Director-General, Dr. Ngozi Okonjo-Iweala, who joined the meeting to share her priorities for WTO reform and collaboration with the Ottawa Group.
The United Kingdom’s Secretary of State for International Trade, Liz Truss, also participated in the meeting, the first time a minister from the U.K. has engaged in the Ottawa Group.
During the discussion on the three pillars of the WTO reform – negotiations, dispute settlement, and transparency and monitoring, the ministers emphasized the importance of working quickly to resolve the Appellate Body impasse, concluding negotiations on fisheries subsidies, advancing work on the Joint Statement Initiatives, including domestic regulation of services, and e-commerce by MC12. Ministers also agreed to advance efforts on health, agriculture, environment, transparency, and trade and gender.
Minister Ng also led a discussion on the next steps on the Ottawa Group COVID-19 Action Plan where she encouraged further concrete steps on the Ottawa Group’s Trade in Health Initiative which seeks to strengthen global supply chains, as well as facilitate trade in essential medicines and medical supplies. The ministers discussed broadening support for the initiative through engagement with broader WTO Members on the issue.
The ministers also agreed on the importance of the Ottawa Group engaging with the larger WTO membership, including the United States Trade Representative (USTR) Katherine Tai.
“Canada is a trading nation. Nearly two-thirds of our economy and millions of Canadian jobs depend on international trade and investment—as we prepare for a strong, inclusive economic recovery, international trade will be crucial to generate growth and create good jobs. Fair, predictable, rule-based trade creates opportunities for Canadian businesses to succeed at home and abroad. Through our leadership of the Ottawa Group, Canada is committed to making the WTO a more inclusive, modern, resilient, and transparent system for all,” the minister said.

Who is Hiring Now in Finance in Ontario? Job Fair