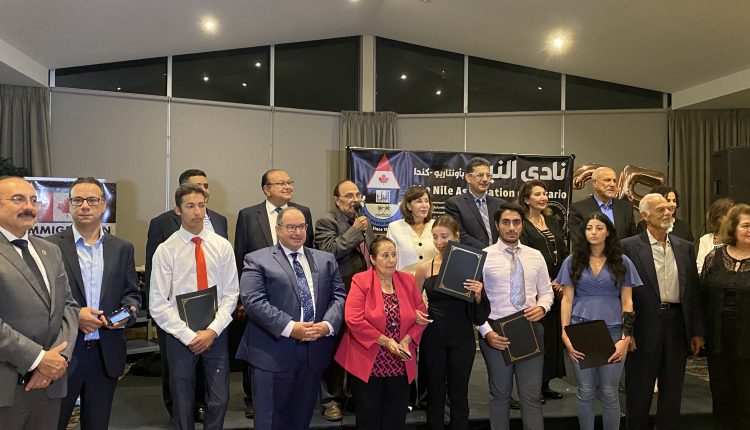 The Nile Association of Ontario (NAO) organized its annual gala Saturday night, to mark the 35th anniversary of its establishment, as it is the oldest Egyptian gathering in Canada.

The ceremony, which was held in Lionhead Golf Club, was attended by Egyptian community leaders, along with Professor Hoda El-Maraghi, who received the highest civil order in Canada, and her husband, the great Egyptian scientist Dr. Wagih El-Maraghi, Professor of Industrial Engineering at the University of Windsor, MPP and Deputy Minister of Tourism, Sheref Sabawy, and members of the Canadian Egyptian Heritage Association (CEHA). The president of the Nile Association, Dr. Mohamed El-Halwagy, delivered a speech in which he praised the efforts of the Egyptian community over the past years and their solidarity together in order to provide services to Egyptians in Ontario.

The ceremony witnessed entertainment, in addition to announcing the winners of the scholarships offered by the club to students newly enrolled in universities, a tradition that the club has been keen on since its establishment with the support of the members and founders.

For his part, Brampton Mayor, Patrick Brown, praised the beauty of the Egyptian culture and heritage in his speech, describing the Nile Association as “a large and proud Egyptian Community in Brampton”, noting that he has a lot of Egyptian friends in Canada in different domains. He presented a certificate of recognition from the City of Brampton to Dr. El-Halwagy on NAO’s 35th anniversary. The Nile Association of Ontario is one of the most prominent Egyptian groups in Canada. Its establishment came from a gathering of a number of Egyptian families in the city of Toronto to teach Arabic at York University in 1984, before this number increased to about 50 immigrant Egyptian families.

Over the years, the club has played a leading role in supporting promising Egyptian minds through initiatives presented by a number of Egyptian scientists in Canada, including Dr. Hoda El-Maraghi, the first dean of the Faculty of Engineering at the University of Windsor, and encouraging Egyptians to study at university, by offering scholarships to study at the Faculty of Engineering.