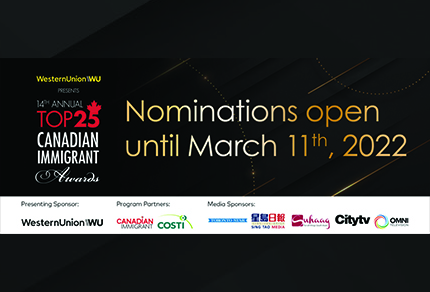 Friday, March 11th is the last chance for those who want to nominate someone for the Top 25 Canadian Immigrant Award.

The stories of their immigration journeys, the barriers they have overcome, their amazing achievements, and the difference they have made in their adopted country are important to share.

For the 14th year, Celebrating immigrant success will be done with the support of a new presenting sponsor, Western Union.

Nominations are now open for Western Union Presents the Top 25 Canadian Immigrant Awards of 2022 until tomorrow.

Immigrants who have been honoured with this prestigious national award in past years include Supreme Court Justice Mahmud Jamal, viral Bhagra sensation Gurdeep Pandher, broadcast journalist Ginella Massa, TV icon Monika Deol, celebrity restaurateur Vikram Vij, prima ballerina Chan Hon Goh, as well as many unsung heroes who have demonstrated incredible contributions in their communities and for the country.

“At Canadian Immigrant, we support newcomers to succeed in Canada with the information they need to help them in their journey, and the inspiration to motivate them. The stories we share through our Top 25 awards is an important way newcomers can see themselves represented, inspiring them to stay determined and resilient, even in the face of challenges they experience as new Canadians,” said Sanjay Agnihotri, Publisher of Canadian Immigrant, a national multimedia platform and producer of the awards. “The advice and examples of our Top 25 are a beacon to any newcomer starting to find their way in Canada.”

“As a global brand with over 170 years focused on connecting people, communities, and countries, serving as presenting sponsor of the Canadian Immigrant awards is yet another way of reinforcing our commitment to our mission,” says Mitchell Steiman, Digital Growth Leader – Canada, Latin America & Caribbean at Western Union. “Immigrants are an incredible engine of growth in Canada and now more than ever we need to recognize and reward those who are blazing a trail of excellence, inspiring confidence, and allowing others the opportunity to dream bigger. We encourage Canadians across the

length and breadth of the country to nominate someone who is a beacon of hope and help move the needle on creating a lasting positive impact across the country.”

Ontarians to Get 20% Back To Support Tourism