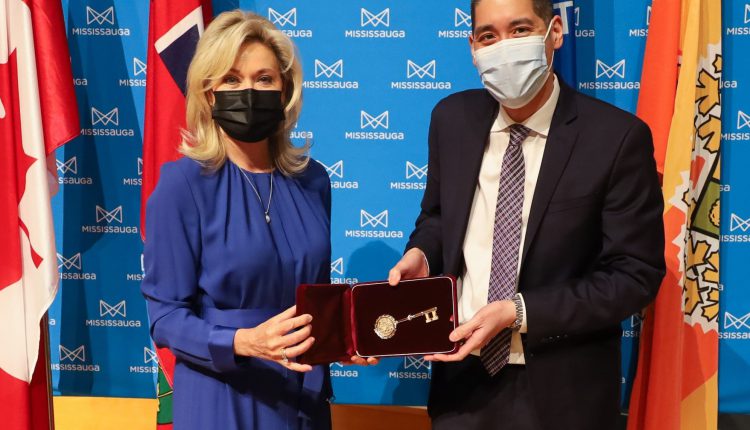 Peel’s Region’s Medical Officer of Health Dr. Lawrence Loh has been awarded the Key to the City of Mississauga in recognition of his significant contributions to the health and well-being of Mississauga residents over the past two years.

During her weekly press update on Thursday, Mayor Bonnie Crombie surprised Dr. Lawrence Loh by presenting him with this significant award.

It was the final regular briefing that Loh is scheduled to attend after spending the last two years delivering weekly updates about the COVID-19 pandemic to Mississauga residents.

“The City of Mississauga, its residents, and all of Peel Region will be forever grateful to Dr. Loh for his leadership and sage advice during what has been an incredibly difficult and uncertain time for so many people across our city. While much has changed since Mississauga reported its first case of COVID-19 nearly two years ago, we have Dr. Loh to thank for doing everything in his power to protect the health and safety of our residents,” said Mayor Bonnie Crombie.

The Region of Peel was one of the country’s hardest-hit regions during the pandemic. Under Dr. Loh’s leadership, it went from being a hotspot to among the most highly vaccinated regions in Ontario, with over 3.25 million doses administered across Peel to date.

“Presenting him with the City’s highest honour is our way of expressing our deepest gratitude on behalf of all Mississauga residents.” said Mayor Bonnie Crombie. “What truly sets Dr. Loh apart is that he has never shied away from making the tough and sometimes unpopular decisions that best protect the health of our businesses, workers and residents. He has also fought incredibly hard to protect our most vulnerable residents and strongly advocated that Mississauga and the Region of Peel be treated fairly during the vaccine rollout, particularly in the early stages.”

Dr. Loh took on the role of the Region of Peel’s Chief Medical Officer of Health in March 2020, a critically challenging time of the pandemic. In his role, he oversaw the Region’s vaccine rollout – one of the largest public health initiatives the Region has undertaken. He also lent a strong voice to the call for paid sick so that workers didn’t have to choose between losing a paycheque or going into work sick, and continues to find creative ways to get shots into the arms of those who face barriers to getting vaccinated.

“In addition, Mississauga would also like to thank the thousands of healthcare heroes, Peel Public Health, Trillium Health Partners, City, and Regional staff and frontline workers including Mississauga Fire and Emergency Services, Peel Police, and Peel Paramedics who showed us the definition of resilience, dedication and perseverance over the past two years. While we will be eternally grateful for Dr. Loh’s contributions and while we are learning to live with this virus, we must remember our work is far from over. We must remain vigilant and continue to work together to blunt the spread by getting vaccinated or boosted and staying home when we are sick,” added Mayor Crombie.

Speaking with reporters on Thursday, Loh said the key to the city “represents the work of many hands who have truly made a difference in shifting the risk around COVID from something that was catastrophic” to something that we can learn to live with.

Loh, however, warned that “even if we are coming in for a landing” in our long fight against COVID-19 there will likely still “be some bumps along the way.”

The Key to the City of Mississauga is the City’s most prestigious form of recognition. It is reserved for and bestowed upon esteemed community members, former residents, and visitors whom the Mayor wishes to honour. It’s a sign of great achievement and distinction and is given to an individual who has positively impacted and changed our City for the better. While primarily symbolic, the key signifies trust and freedom for the recipient to enter in and out of the city as they wish knowing that Mississauga will always be their home.