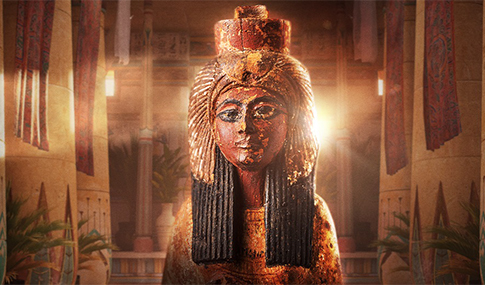 Queens of Egypt are now ruling the Canadian Museum of History. The amazing, magnificent and highly anticipated exhibition was opened Wednesday June 2,2021, and will last until August 22, 2021

The exhibition is an enthralling journey into the world of Nefertari, Nefertiti, Hatshepsut and other women of power and influence in ancient Egypt.

Step 3,500 years back in time, into an immersive, multi-sensory experience that reveals the stories of seven fascinating female figures who played important military, political, diplomatic and religious roles in the New Kingdom (1539–1076 B.C.). They ruled as the wives, mothers, sisters and daughters of pharaohs — and, in one case, as pharaoh herself.

“We are thrilled to welcome this exceptional exhibition at last,” said Caroline Dromaguet, Acting President and CEO of the Canadian Museum of History said in a media release. “Queens of Egypt is a rare opportunity to see treasures from one of the most important collections of ancient Egyptian objects, but above all to focus on an aspect less known and just as important: the place of women and their role within Egyptian royalty.”

Visitors will be spellbound by more than 300 monumental statues, sarcophagi, funerary objects, jewellery and other iconic artifacts. One of the highlights is the “Harem Conspiracy Papyrus,” a remarkable document describing the accusations, convictions and punishments meted out to conspirators who plotted to assassinate the pharaoh Rameses III. The majority of the objects on view come from Museo Egizio in Turin, Italy, which houses the largest collection of Egyptian antiquities outside of Egypt.

“We are very glad to have the Canadian Museum of History hosting Queens of Egypt, especially in such a complex time globally,” said Christian Greco, Director of Museo Egizio. “The artifacts displayed in the exhibition are much more than silent objects, but indeed a living world heritage, capable of transmitting universal stories from the past to today. We are sure that they will enthrall and captivate the Canadian public.”

Queens of Egypt is a unique and unforgettable journey into one of history’s most important ancient civilizations. Presented against a backdrop of giant screens depicting landscapes and ways of life in the New Kingdom, the exhibition culminates with an evocation of Queen Nefertari’s lavishly decorated burial chamber, and her journey into the afterlife. The tomb is considered one of the most beautiful ever uncovered in Egypt.

“We are very proud of how our institutions have collaborated to present Queens of Egypt at the Canadian Museum of History,” said Anne Élisabeth Thibault, Executive Director of Pointe-à-Callière, Montréal Archaeology and History Complex. “In showcasing these remarkably diverse and beautiful objects in an eloquent museum setting, this exhibition gives the items on display an opportunity to tell a touching story through their acknowledged links to legendary Egyptian queens.”

The exhibition was originally due to be presented at the Canadian Museum of History in the summer of 2020, but was postponed due to the pandemic.

Queens of Egypt also features Mission Nefertari, an area dedicated to family activities for visitors of all ages. In addition to on-site events and activities related to the exhibition, the Museum is offering special programming online, including a guided tour with the curator, and a virtual adventure.