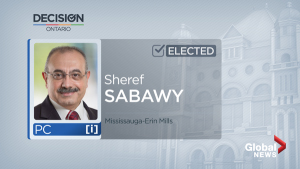 Progressive Conservative Candidate, Sheref Sabawy, has been re-elected in Ontario Provincial elections in Mississauga-Erin Mills, receiving around 42% of the votes.

His competitors Imran Mian, the Liberal Party’s candidate, who came second, and Farina Hassan from the NDP, received 37% and 12% respectively, according to unofficial results. The Computer network and IT technologies professional has celebrated his victory among his campaign team tonight, thanking every one of them for his efforts during the past month.

The Egyptian immigrant was first elected in 2018 with 41.61 percent of the vote. In October 2019 Sabawy became parliamentary assistant to the Minister of Heritage, Sport, Tourism, and Culture Industries.