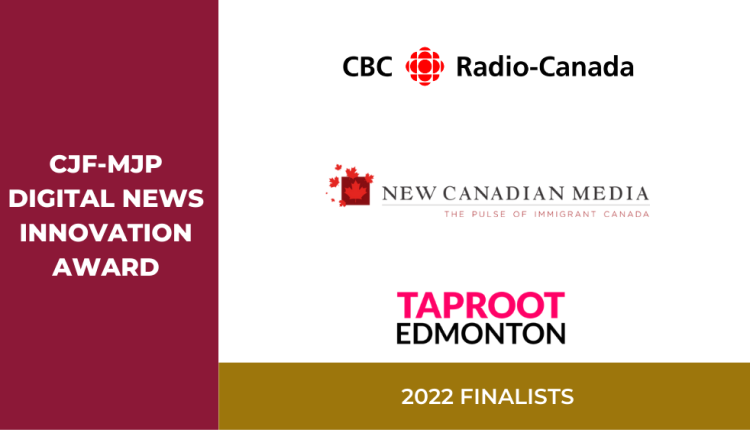 “It was difficult to determine the finalists because every entrant was strong, to the extent that the point difference among the best candidates was negligible,” says Anita Li, media consultant and Ryerson University journalism instructor, in a news release. “I was incredibly impressed by the depth and breadth of innovation, ranging from the editorial to the business sides of journalism. Clearly, the future of journalism innovation in Canada is very bright.”

The three finalists for this year’s award and the stories or initiatives shortlisted for the award are:

The Canadian Broadcasting Corporation for “Black On the Prairies,” an interactive project to ensure that the experiences of Black people in Alberta, Saskatchewan and Manitoba were included in the global and national discourse on anti-Black racism. To meaningfully tell the stories of Black communities in the Prairies, CBC created a 10-member community board to advise on the project from ideation to delivery. This project has since been adapted into a teacher’s guide for all grades across the Prairies.

New Canadian Media (NCM), an online outlet providing nonpartisan news representing Canadian immigrant communities, for its Collective Membership Model. Through an alliance with the Canadian Association of Journalists (CAJ) and affiliation with the National NewsMedia Council, NCM members gained access to pre-publication advice and professional development opportunities. The alliance has resulted in an increase in NCM-CAJ members, a 33-percent-growth in the NCM’s newsletter audience and an increased capacity for NCM to publish five articles a week, making its reporters eligible for National Newspaper Awards.

Taproot Edmonton, an online outlet covering local affairs in Edmonton, for its innovative coverage of Edmonton’s 2021 municipal election. Taproot developed an interactive survey that allowed voters to find which candidates best aligned with their values. The survey received more than 21,000 responses and now serves as a reusable engine that can be employed for future elections.

The winner will be announced at the CJF annual awards ceremony on June 7 at the Art Gallery of Ontario. For tickets, tables and sponsorship opportunities, see contact information below or visit the CJF Awards page.

The jury members are: