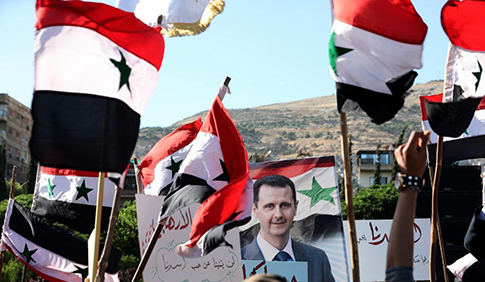 “Canada denounces Syria’s decision to hold presidential elections tomorrow, May 26, amidst ongoing human rights abuses and grave violations of international law perpetrated by the Assad regime. Free and fair elections will not be possible until an inclusive constitution is drafted that can form the basis of a credible pathway towards a political settlement or transition, in accordance with UN Security Council Resolution 2254 (UNSCR 2254).

“As is made clear by UNSCR 2254, free and fair elections must allow for UN monitoring and for all Syrians, including refugees and internally displaced persons, to participate, without fear of persecution. They must also encourage the meaningful participation of women and be free from the intimidation tactics we have seen during early diaspora voting. Credible elections must allow for genuine political discourse between candidates, whose nominations should be transparent and not at the mercy of the regime in power. In the absence of any of the above conditions, tomorrow’s elections cannot represent the will of the Syrian people and Canada does not recognize their legitimacy. “These elections do not signify the end of the Syrian people’s struggle. Canada encourages the international community to refuse any normalization of relations with the Assad regime, which refuses to engage meaningfully in the negotiation of a political solution and continues terrorizing its electorate with chemical weapons, arbitrary detention, extrajudicial killings, enforced disappearances, and torture.

“Canada reiterates its support for the UN Special Envoy for Syria’s efforts to promote a Syrian-led political process, based on UNSCR 2254, that promises future prosperity for all Syrians and protects their rights and dignity, including the right to vote in free and fair elections. We urge the Assad regime to engage meaningfully in this process.”