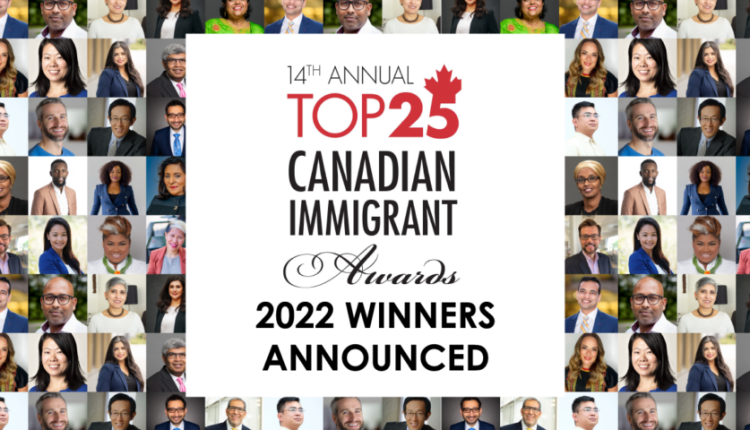 The Top 25 Canadian Immigrants of 2022 were chosen after an extensive nomination, judging, shortlisting, and public online voting process. Hundreds of nominations were received, from which 75 finalists were shortlisted by a diverse judging panel of past winners. Nearly 70,000 online votes were cast at canadianimmigrant.ca.

“We are so pleased to celebrate such amazing immigrants for the 14th year of our awards, now with the support of presenting sponsor Western Union and sponsor COSTI Immigrant Services,” says Sanjay Agnihotri, publisher, Canadian Immigrant magazine. “This year’s winners are all truly inspiring examples of immigrant success stories.”

Winners were chosen from a stellar list of 75 finalists, by a combination of online votes and scores from our judging panel, made up of past winners (including Jaclyn Zhang, Hassan Wadi, and Zen Tharani).

Among the Top 25, one winner has been selected for Youth Award recipient and one as Entrepreneur Award winner.

First launched by Canadian Immigrant in 2009, the program takes place online and nominations are open to all Canadians. The program is divided into three phases: nominations, voting, and winners announcements. At the start of each year, Canadian Immigrant invites nominations based on a variety of criteria, which range from contribution to the community to professional accomplishments. The award is open to immigrants from all walks of life, be it a community advocate or volunteer, a successful entrepreneur or a cultural icon. A judging panel composed of leaders who work within the immigrant or ethnic communities determine the shortlist on which the public vote.