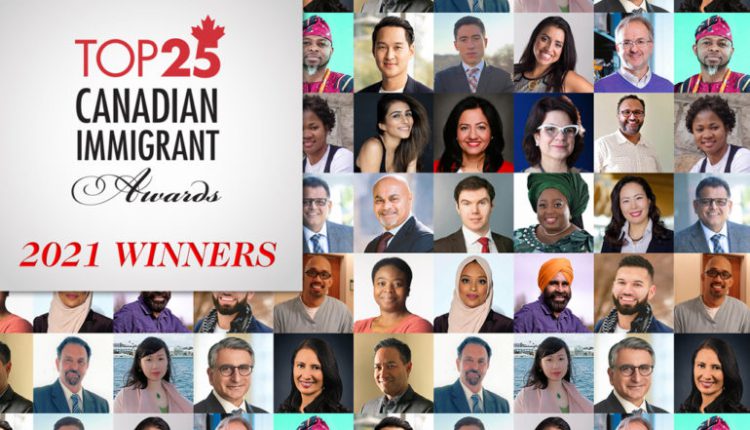 Two Arabs are among this year’s 25 Canadian Immigrant Awards, which this year shows the importance of determination and the ability of the human spirit to overcome challenges.

The first is Jack Rabba, an immigrant from Palestine, who started working in restaurants and hotels in the Middle East at 13 years old to help support his family and bedridden father. He remembers meeting visitors from many countries, but the kindness of Canadian travellers always stayed with him. So, in 1966, Rabba chose to immigrate to Canada with only the promise of a clerical job at a hotel and the clothes on his back.

“People told me Canada is so hard that I would come back like a dog with my tail between my legs. I would tell them that it doesn’t matter what job I have to do to stay in Canada, I’m not coming back,” Rabba says. “I had no money, so I had to scrape together just enough to take a passenger ship across the Atlantic. “

Unwilling to take his opportunity for granted, he spent every moment building a better life, still helping financially support his family back home before helping them immigrate, too.

Rabba soon got work as a convenience store manager and worked long hours, saving enough for a down payment on a small convenience store in the heart of Toronto. He quickly realized Torontonians were looking for more variety, so he expanded the store’s selection, and one store became multiple neighborhood markets. In 1985, Rabba renamed the chain and launched Rabba Fine Foods. Today, there are 35 locations across Ontario, employing thousands of Canadians.

“I had persistence, optimism, and dedication to overcome all the cultural and linguistic obstacles to succeed,” says the entrepreneur.

Now in his 70s, Rabba is still hard at work. “I focus on the success of Rabba Fine Foods as well as our other wholesale, food, and real estate businesses. We also continue to heavily support local organizations such as the Mississauga Food Bank and Trillium Health Partners.”

Jack Rabba’s Top Tip: “Focus on opportunities and focus on positivity. There will be those people who try to drag you down and want you to dwell on the difficulties or negativity in the world. God gave you a gift that you have been able to come to this great country of Canada. Use your chance to work hard and develop yourself. Focus on all the positivity and the opportunities, not on those who doubt you.”

Hassan Wadi is the second Canadian of Arabic origins. He is from Saudi Arabia.  As a fitness recreation programmer with the City of Mississauga, Hassan Wadi spends his days motivating people to be healthy. Giving it his all, he has been recognized as one of the Top 10 fitness professionals in Canada by Canfitpro. Taking his desire to motivate others from the gym to the stage, Wadi has become an award-winning professional speaker.

The 32-year-old’s success is fueled by his immigrant background. Born in Saudi Arabia, his family came to Canada when he was just eight. He saw his father go from working at the biggest bank in Saudi Arabia to working the night shift at a convenience store.

“For me, it’s all about my family. They have sacrificed their lives, families, and friends to give me a better future, and I think it’s the least thing I can do to give back and give them a better life,” Wadi says.

His desire to make things better for others is also evident in his speaking, under his brand Wadispeaks. He has emceed events with up to 60,000 people in attendance and has spoken at schools and conferences, with inspiring messages about discovering your purpose.

He builds on that message through his Youth Speaker Academy. “I help youth reach their full potential by coaching them on the public speaking and leadership skills they need to excel. I help them discover their talents, get jobs and then push them to give back to their communities,” he says, adding that his 1,000+ graduates have collectively raised more than $50,000 to build water wells around the world.

Wadi’s own philanthropy extends to being the official spokesperson of Human Concern International, Canada’s oldest Muslim charity. “My role is to be the face of the charity. As of today, I’ve helped them raise more than $2 million for people in need.”